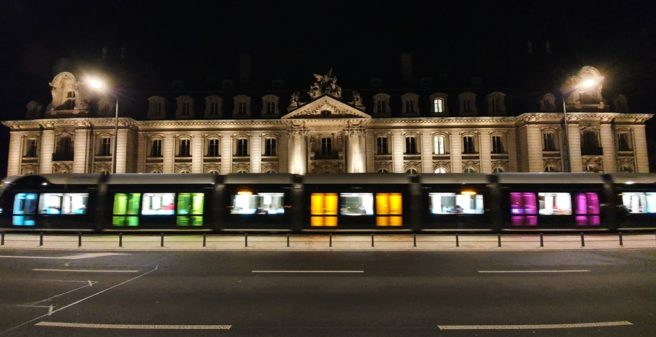 Since 30 November, the trams are running on the new route extension as a so-called “White March.” Test runs had started even earlier, but on 13 December 2020 revenue service finally began on the new section and the tramways now go straight to Luxembourg’s Central Station.

Three years after the opening of the first section on the “Kirchbergplateau” with its governmental and EU-institutions, Luxembourg’s modern tramway finally reaches the inner city center: From the previous terminus Stäreplaz/Place de l’Étoile, it carries on for roughly 2 km, offering four new stops to Gare Centrale – catenary-free, as it was already the case on the previous section Rout Bréck (Pont Rouge) – Stäreplaz/Place de l’Étoile, which opened on 27 July 2018. The seven-module CAF Urbos low-floor tramcars use their roof-mounted supercapacitors, which are charged via short third-rail streches buried in the ground at the stops.

The city centre streets were redesigned and other traffic was cut back, the number of buses here will also be reduced significantly. The tramways run at 10-minute intervals during the day, enforced to a 5 minutes headway during rush hour, and all travelling is for free as a zero fare scheme had been introduced nationwide on 1 March 2020. See our detailed report here: https://www.urban-transport-magazine.com/en/free-of-charge-public-transport-requires-additional-investment-luxembourg-sets-the-pace/

Further extensions southbound to Cloche d’Or and in the north-eastern part of the city to Findel Airport are under preparation and/or construction. The trams should get there by 2023, which will more than double the current route length from just over 7 km to 16 km. In addition, Luxembourg’s administration had already presented the project of a high-speed tramway connection beyond Cloche d’Or to the neighbouring municipalities of Esch-sur-Alzette, Leudelange, Mondercange, Schifflange and Sanem south of the capital at the end of October 2020. This new line would be 17 km long – detailed planning is underway. Luxtram is already an integral part of urban transport in the capital of the Grand Duchy.