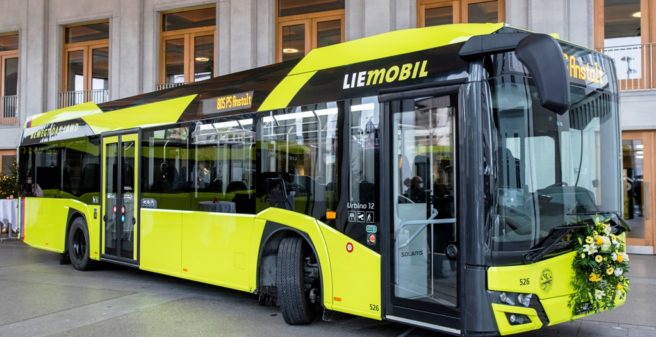 A remarkable anniversary: buses have been running regular services in the Principality of Liechtenstein for a century already. On 15 March 1922, operations began with initially two daily “Kraftwagen Postautokurs” services between Eschen and Balzers. A memorable day for the population, especially as the 24-hour time count was also introduced in the country at the same time – 4.00h p.m. became 16.00h.

The service was gradually expanded, and the network soon included connections to both neighbouring countries. “Postautohalter” (operators on behalf of the Swiss Post) provided the regular services. In 2000, the country established the public-owned Liechtenstein Bus Anstalt, and since 1 January 2012, LIEmobil – Verkehrsbetrieb LIECHTENSTEINmobil – has been responsible for designing the public transport services.  LIEmobil conceptualises and organises public bus transport in Liechtenstein and awards the operational management to contracting companies by invitation to tender. Until December 2021, the largest contractor was PostAuto Liechtenstein Anstalt, a subsidiary of Post Auto Schweiz. Since 12 December 2021, the Liechtenstein-based bus company Philipp Schädler Anstalt has been operating the regular services in a consortium with Bus Ostschweiz AG headquartered in Altstätten/Switzerland.

For the passengers, the change of operator was accompanied by the renewal of more than half of the bus fleet. In addition to 17 new 12-metre buses, 4 new Solaris articulated buses were purchased. In the course of 2022, the first four electric buses in Liechtenstein of the Irizar “ie bus” type will also be introduced. In return, the distinctive double-decker buses disappeared from regular service.

On behalf of the government of the Principality of Liechtenstein, 25 bus routes cover the entire country, some of which cross the border into Austria and Switzerland. There are also 4 night bus lines and 2 ski bus lines. Around 4.4 million passengers travel on the buses every year. Approximately 7,000 of a total of 35,000 inhabitants of the country use the annual season ticket at a price of SFr 370.- Its price is deliberately kept low to create incentives to use public transport. Accordingly, the cost recovery ratio is around 20% – the rest is compensated by the state budget.

The local transport services in the Principality of Liechtenstein also include the railway line from Feldkirch in Austria to Buchs in the Swiss canton of St. Gallen, which runs over Liechtenstein territory for 8.9 km of its route. Its opening around 150 years ago, on 24 October 1872, marked the beginning of regular public transport in the country. The trains have been running electrically since 1926. The current service of the operator ÖBB was to be improved by a suburban railway concept, but the population rejected the necessary extensions in a referendum in 2020. Nevertheless, improvements of the rail service are on the agenda.