1200 buses for DB will come from MAN and Ebusco 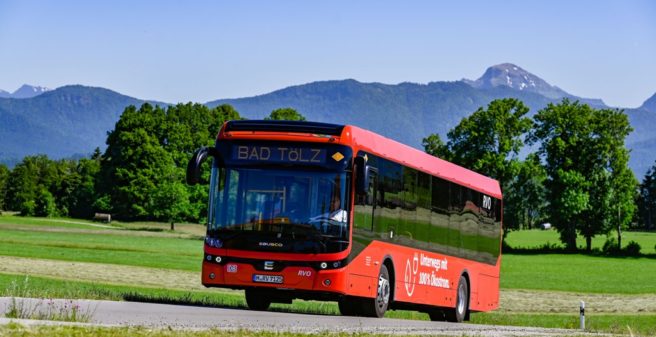 Ebusco 2.2 of the DB subsidiary RVO on the road in Bavaria | © DB / Max Lautenschläger

DB Group has concluded a framework agreement with MAN and Ebusco for the supply of up to 1,200 new buses between 2023 and 2026 at a cost of around 400 million euros. 260 of them are to be electric buses. On the basis of the framework agreement, the DB Group can call for the new buses it needs in each case.

The suppliers of the buses will be MAN and Ebusco. The electric buses will by supplied by Ebusco, all the others by MAN. The MAN engines will meet the “Euro 6e” emission standard, and a great many of them will have a fuel-saving “efficient hybrid” drive. The diesel engines will also be able to be fuelled with the bio-fuel HVO. HVO is produced from biological waste and residual materials. CNG is considered as an option, too.

The DB Group is procuring the electric buses from Ebusco because they are quiet and emission-free. Ebusco will also supply the first electric articulated buses ever for the DB Group. Since the storage capacity of the batteries has increased significantly in recent years, the new Ebusco also do not need any additional heating, which would have to be operated with fossil fuel oil.

DB Regio Bus CEO Frank Klingenhöfer: “With these new buses, we are greatly increasing the proportion of vehicles with electric and hybrid drive in our fleet.With this, we are significantly reducing our CO2 emissions and taking another step towards climate-neutral local transport on the road as well.”

Passengers and drivers may look forward to a high level of comfort. For example, all new buses will have air conditioning, upholstered passenger seats and modern LED lighting. USB charging ports on the seats and WLAN are possible. The platform for wheelchairs, prams and e-scooters will be kept large. The driver will be assisted by a turning assistant, reversing camera and LED headlights. And just in case, the new buses will have a fire extinguishing system in the engine compartment.

It is worth noting that DB has also concluded framework agreements with “second suppliers”. They are supposed to step in should the actual “main supplier” be unable to deliver. In the case of diesel buses, DB wants to buy from Scania, while MAN is supposed to step in for the electric buses in an emergency.

Decisive for the award to MAN and Ebusco were not least the “life-cycle costs” (expected costs over the entire service life). And diesel and electricity consumption are very important factors in this respect. When awarding the contract, DB also took into consideration social components such as employee satisfaction, among others.