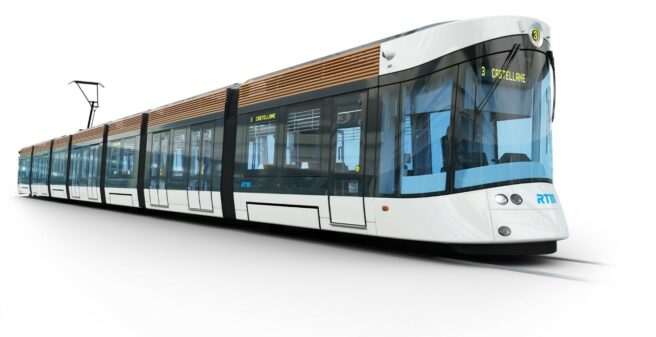 CAF has been chosen by RTM (Régie des Transports Métropolitains) that operates the entire Marseille public transportation network, to supply 15 new tramway units. The contract (value €57 million) also includes an option to increase the number of trams depending of the network extensions to come.

Marseille is the second most populated city in France after Paris, with approximately 900,000 inhabitants, and its port is one of the most important commercial ports in Europe. Besides the three tramway lines, RTM operates both underground lines as well as the bus and ferry services in the metropolitan area.

The new Urbos platform trams will consist of 7 modules spanning a total length of 42.5 metres. Their design is similar to that of the vehicles currently operating in the city, with a livery styling that evokes marine motifs that Marseille is historically identified with.

The design was created for the first low-floor generation by the French design agency MBD Design. Bombardier Transportation delivered a total of 26 five-car Flexity Outlook trams for the opening of the system in 2007, which were extended by two low-floor segments in 2012. Six additional vehicles were delivered in 2013.

The units to be supplied by CAF are planned for operation on the 3 existing lines on the network, and it should be borne in mind that the T3 line will soon be extended to the north and south of the city. The inauguration of the extensions is planned for mid 2025.

This project forms part of the framework for the transport plan and mobility agenda of the Aix- Marseille-Provence Metropolis, which seeks to improve its inhabitants’ standard of living by improving public transport infrastructures and services; specifically, the extension of the tramway network being one of the top priorities of the investment programme as it becomes the backbone of the Metropolis transport network.

CAF is strengthening its position in the French market, where it has won a significant number of projects. Noteworthy amongst these was last year’s contract as a consortium to supply 146 trains for the Paris RER B commuter line, the contract for 28 regional trains with an option for an additional 75 trains for SNCF, the projects to supply trams for the cities of Nantes, Besançon and St. Etienne, as well as the refurbishment of the train fleet on the Lyon metro system’s D Line. Also worthy of note is the major contract which Montpellier Méditerranée Métropole awarded last June for the supply of 60 trams; the largest tram contract in France so far this year, which, together with this new contract, confirms CAF’s position as one of the world market leaders in this sector. We reported here:

CAF has also recently finalised the purchase of the Reichshoffen manufacturing plant, located in the French region of Alsace, thereby strengthening its production capacity in France as part of its growth strategy in the country. This plant will join CAF’s plant in Bagnères de Bigorre, consolidating its position as the second largest player in the French railway industry. We reported here: