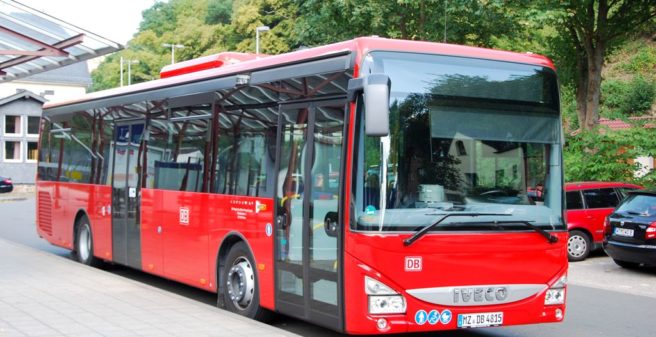 Vysoké Myto is located about 150 kilometres east of the Czech capital Prague (Praha). It is proud to have the largest marketplace in the Czech Republic. Despite this, the town with its 12,315 inhabitants (as of 2018) is probably to be counted among the smaller towns.

But it has one of Europe’s largest bus factories, where Iveco recently completed the number 150,000 bus ever built here.

In 1895, Josef Sodomka (born in Vysoké Myto in 1865) founded a coachbuilding business in his home town, the “Carrosserie Sodomka”. Initially, carriages were produced here, but soon bodies for the chassis of automobiles were also manufactured. Car bodies from Sodomka were beautifully designed and had a good reputation because they were considered to be solid.

33 years after the company was founded, the first bus left the Sodomka factory in 1928. A body with 14 seats had been placed on the “Skoda 125” chassis. Six buses were built in Vysoké Myto in the very first year, 1928,

1895: Josef Sodomka opens a coachbuilding business in the town of Vysoke Myto – Czech Republic, 160 kilometres east of Praha (Prague). First he builds carriages, then he supplies bodies for passenger cars, and in 1928 he builds his first bus, a car with 14 seats on the Skoda chassis 125.

After the Second World War: Czechoslovakia belongs to the Eastern Bloc, Sodomka is nationalised in 1948. From then on it trades under the name of “Karosa”. Buses are now produced here that have also become known and famous in the West because of their pioneering design features. For example, the “Skoda 706 RTO”, 1956 to 1971, a total of 14,969 buses built – including the first articulated bus built in Czechoslovakia. In Poland, the 706 RTO is reproduced under licence as the Jelcz 043, and there is also an optically outstanding matching trailer. The series “B” (city buses) and “C” (intercity buses) also became famous, of which 37,166 were built until 1999. Their constructional novelty was that their body consisted of six prefabricated “main panels” – accordingly, the cars of the individual types within these series were also very similar to each other.

After the fall of communism (1993): Karosa is taken over by Renault, later Irisbus. The first newly developed type after the fall of communism is the „Recréo“ model (900 series), which is clearly related to the B and C series. It is the first bus from Vysoke Myto to be sold successfully in the West (especially in France, Germany and Italy). By 2006, 13,071 Recréo were built, half of which went to France.

From 2006, the successor to the Recréo is the Crossway, of which more than 50,000 have been built. Of these, more than a thousand went to the DB Group alone.

Magirus-Deutz (Germany) – share 20 % – 1980: Deutz sells its shares in Iveco to Fiat, thus the brand name Magirus-Deutz is dropped, instead “Iveco-Magirus”, in 1982 the bus plant in Mainz is closed down

Unic (France) – already owned by Fiat when Iveco was founded.

From the beginning of the 1980s, Fiat was already the sole owner – see Deutz Group withdrawal

Iveco thoroughly modernises the plant, which becomes one of Europe’s most modern bus plants. The Iveco Crossway continues to be built here – it is only built in Vysoke Myto, at the same time the only model currently produced here.

A total of more than 50,000 Crossway from the Vysoke Myto factory. We reported about Crossway no. 40,000, a 15-metre-long three-axle bus, here: https://www.urban-transport-magazine.com/en/iveco-40000-crossway-delivered/