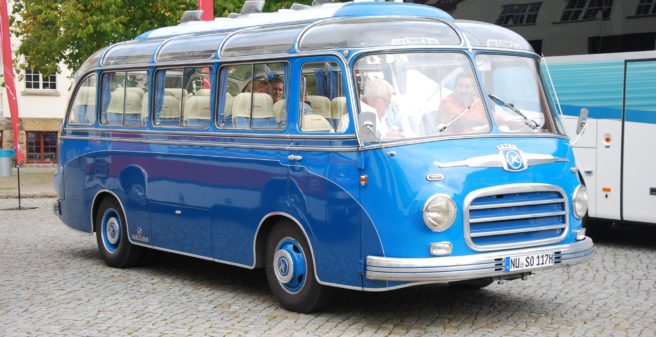 Setra celebrated a world premiere at the Geneva Motor Show in March 1955. For the first time, the bus builder from Ulm showed the smallest bus that had ever left its production lines: the Setra S 6. It was the dr. bus type of the new bus brand Setra, which was launched by Kässbohrer in 1951. The Setra S 6 was part of the the brand’s first series of buses, which also included the Setra S 8 as well as the Setra S 10.

The Setra S 6 was truly a tiny vehicle. With a length of only 6.70 meters, it could carry a maximum of 25 passengers. The bus was widely referred to as a “Midibus”.

The little Setra was very popular among the bus operators at the time. It was manufactured in Ulm for almost nine years and overall the impressive number of 1,172 buses of this type left the production line at Kässbohrerstraße in Ulm. Even today, several Setra S 6 are still in service on the roads. Some S 6 have survived as a camper.

Given the small length of the car, there was little space available for the powertrain in the rear of the bus. The designers solved the problem by combining the engine, transmission and differential into one “block”, thus avoiding power transmission components between the different elements of the powertrain.

The Setra S 6 was even converted into a fully fledged bus. The Berlin BVG had a few of them, for use on certain low-demand routes in the 1960s.

When production stopped in 1964, Setra continued to build midibuses. The immediate successor of the S 6 was the Setra S 7, of which 148 were built. Two years later, a slightly modified version was presented as model S 80. Both, the S 7 as well as the S 80 were already slightly longer, which increased the cabin space to 34 passengers. The S 80 remained in the program until 1977 and 1,246 examples of this type left the factory.

In May 1979, the next little Setra of the S 208 H type appeared. This model was already available with real armchairs just like “full-grown” buses.

And currently the smallest Setra bus is the 10,465 mm long S 511 HD. Only available upon request, it is positioned as a very luxurious bus. For example, a proper galley can be delivered. Despite its length of ten and a half meters, the S 511 HD is still considered as a midibus