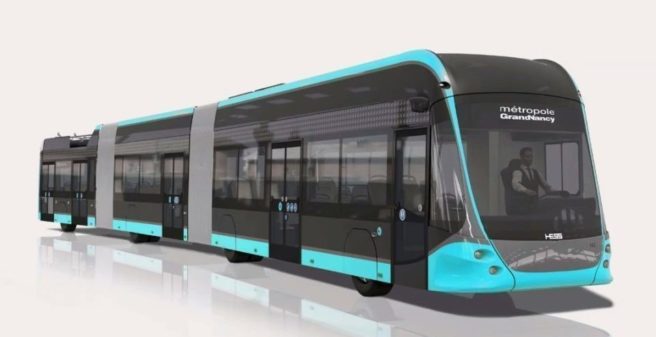 The decision has been made: Carrosserie Hess AG from Bellach, Switzerland, will deliver 25 double-articulated trolleybuses of its LighTram25 trolleybus model to Nancy! This is to replace the ill-fated TVR system, a kind of track-guided double-articulated trolleybus marketed as a “tram”. The system, supplied by Bombardier, did not prove to be reliable in the long run and could never really overcome numerous teething problems. Originally, the replacement by a conventional tram was planned and decided, but a change in the local government led to the decision to abandon the tram project for the time being mainly for cost reasons and to rely on trolleybuses instead – read our report here: https://www.urban-transport-magazine.com/en/nancy-tram-project-postponed-the-trolleybus-is-to-come-back/

This entails an adaptation of the existing overhead system and the end of any kind of mechanical lane guidance. The existing TVR’s own tracks will also be rebuilt and adapted. All this should be completed by 2024 and the 25 new vehicles should also be delivered by then. Their detailed specifications are still pending and will be determined between the authorities in Nancy and the manufacturer by the summer.

TVR is expected to closed down by early 2023, and diesel buses will temporarily provide replacement services. A 3-route trolleybus service operated in the city between 1982 and 1999.