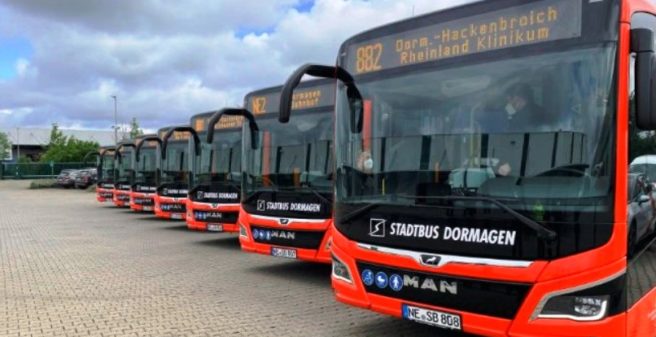 On the left bank of the Rhine, opposite Monheim and the southern districts of Düsseldorf, lies the town of Dormagen with its 65,000 inhabitants. Dormagen is an important location of the North Rhine-Westphalian chemical industry.

The name of the town dates back to the time of the Celts and thus to times before the Romans. Translated into our modern German, it means “gravel field” or “gravel mountain”. That’s logical: the Rhine brings in lots of gravel.

Dormagen has had its own city bus system since 1 June 1997. At that time, several city bus systems were founded in North Rhine-Westphalia with strong support from the state government. The cities of Detmold, Euskirchen, Hürth and Lemgo should be mentioned here. And Dormagen was now also part of this group.

All of these city bus systems had one thing in common: The city bus companies did not (and do not) have their own vehicles and driving personnel. Rather, they rely on the assistance (“on behalf of”) of existing bus companies. In Detmold it was Vogt, in Euskirchen Laschke – today Regionalverkehr Köln (RVK), in Hürth always RVK, and in Lemgo Linke.

The city bus companies were commissioned by the public transport authorities to organise the city transport. Dormagen decided on the basis of a tender from day one that the DB subsidiary “Busverkehr Rheinland GmbH (BVR)” from Düsseldorf will operate the StadtBus routes. They started with low-floor Neoplan N 4011 midibuses, which were typical of North Rhine-Westphalia’s new city bus systems in those early years.

Over the years – thanks to increasing passenger numbers – the buses on the routes became larger. Today there is only the 12-metre-long low-floor buses. The fleet that BVR maintains for Dormagen today consists of five Mercedes-Benz Citaro and sixteen MAN Lion’s City – a total of 21 buses.

Today, Stadtbus Dormagen serves routes 881 to 886, running Monday to Friday from shortly after 5 a.m. to about 8.30 p.m., partly every 20 minutes and partly every 30 minutes (the latter routes 883 and 886). As soon as the “regular” lines have ceased operation, the “night express lines” NE 1 to NE 3 start their service. They run every 60 minutes until around midnight, but on Fridays, Saturdays and before public holidays even until around 3 am in the night.

On Saturdays and Sundays during the day, lines WE 1 to WE 3 (WE = weekend express) run every 30 minutes on Saturdays and every hour on Sundays and public holidays. Their routes are identical to those of the night express lines. And on 5 February, the new line WE 4 will be added, which now also connects the district of Horrem to the line network.

There is also the ALT 5 line, which stands for Anruf-Linien-Taxi. Here, the company Taxi Hillmann is on the road on behalf of StadtBuss. The line runs from the city centre via Augustinushaus, Im Niederfeld and the “Stadtbad Sammys” to Dormagen railway station. And as is the case with such call taxis: the ALT 5 only runs if you have told it at least half an hour in advance that you would like a ride. But then at precisely defined departure times at the respective stops.

A new service is the “STADTBUSsi” (actually spelled just like that). Two electric “London taxis” of the type TX from the manufacturer LEVC (London Electric Vehicle Company) are used, a company whose origins go back to 1908 and which – despite its name – is based in the town of Ansty in the county of Warwickshire. Here they have just built a brand new production facility where they build their vehicles with 500 employees.

The LEVC TX is powered by LEVC’s “eCity” system. Normally, it draws its power from the battery. Should the battery run out of capacity, a 1.5-litre petrol engine starts up and drives a generator, which then produces the necessary traction current. Accordingly, LEVC also emphasises that the car always runs on electricity.

Let us return to the two STADTBUSsi in Dormagen. Based on a decision by the supervisory board of the “Stadtbad- und Verkehrsgesellschaft Dormagen GmbH (SVGD)”, they run parallel to the StadtBussen at times when the WE and NE lines are on the road. However, they are neither bound to a fixed timetable nor to a fixed route, but take the passenger from the boarding point to his or her destination by the most direct route. The difference to taxis is that the travel requests of different customers with similar routes are combined and served in a single journey.

STADTBUSsi’s fare is made up of a basic fare and an aerial fare depending on the distance. STADTBUSsi is cheaper than a taxi, but in return the passenger must accept that other passengers will be picked up or dropped off along the way and that certain detours may be taken. Adults, for example, pay 12 euros for a journey of 12 kilometres as the crow flies.

The two vehicles are also provided by the DB subsidiary Busverkehr Rheinland (BVR). The drivers are employed by CleverShuttle, also a subsidiary of the DB Group. STADTBUSsi can be ordered via the STADTBUSsi app, and this was developed by “Loki”, also a DB subsidiary. Quote from a statement by the Stadtbusgesellschaft Dormagen: “This means that we have everything from one strong provider and are thus well provided for in the event of breakdowns and longer downtimes, as we are then served as a substitute from the DB pool with vehicles and driving personnel.”

In November 2021, Stadtbus Dormagen tested a fuel cell bus of the type “H 2 City Gold” from the Portuguese manufacturer Caetano (UTM reported here: https://www.urban-transport-magazine.com/en/a-hydrogen-bus-for-dormagen/ ). The bus was also well received in Dormagen. So the question is: what will happen with hydrogen buses in the city? Answer: Europe’s largest hydrogen plant is to be built in the Chempark in the city, and Dormagen’s hydrogen buses will also be refuelled here. This means that the conversion to fuel cell buses in the city is dependent on the progress of the construction of this plant.

Because of the fuel cell on the roof, hydrogen buses are currently still relatively high. Therefore, they would currently not be able to pass through a subway in the city. “We are betting that bus manufacturers will still succeed in making fuel cell buses lower.”