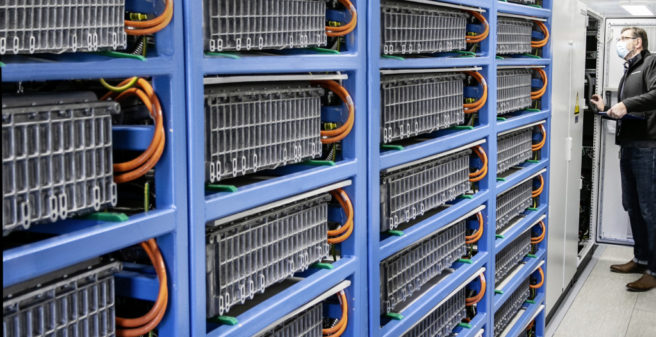 2nd-life for automotive battery systems: Stationary energy storage from Mercedes-Benz Energy GmbH (example). In the GUW + project, a stationary energy storage system is being build based on battery systems that were previously used in fully electric eCitaro city buses. Mercedes-Benz Energy GmbH in Kamenz / Saxony is responsible for developing and implementing the 2nd-life application I © Mercedes Benz

An intelligent direct voltage substation (GUW+) is currently being built at Hannover’s Döhren depot as part of the so-called electric bus offensive. From the end of 2021, it will contribute to supplying the light rail vehicles and electric buses of ÜSTRA Hannoversche Verkehrsbetriebe AG. For the first time, a railway substation will also be equipped with a high-capacity energy storage system. The clou here is that the batteries required for this are not brand new, but have already been used in electric city buses. The contract for the supply of such a 2nd-use battery storage system with a capacity of around 500 kWh has now been awarded to Mercedes-Benz Energy GmbH from Kamenz.

Depending on the application scenario, electric energy storage systems in vehicles can only guarantee the requirements for a minimum range for a limited period of time. The GUW+ project therefore relies on the re-use of batteries from electric city buses.

The storage system is built up using batteries that were previously used as traction batteries in Mercedes-Benz eCitaro electric buses for test drives over thousands of kilometres. The provision and integration into a stationary pilot system by Mercedes-Benz Energy enables subsequent use in the railway substation.

“The acquisition costs of electric buses present a particular challenge. The stationary reuse of the batteries within the transport operation can create additional amortisation paths in perspective and thus further accelerate the electrification of road-based public transport,” explains Holger Elix, Head of Infrastructure at ÜSTRA.

The extension of a classic rectifier substation to include intelligent functions is being developed and demonstrated as part of the GUW+ joint project funded by the Federal Ministry of Transport and Infrastructure (BMVI). In addition to recovering braking energy from light rail vehicles, the storage system enables the balancing of peak loads, the provision of primary control power and continued operation in the event of grid failures. In addition to the consortium leader ALSTOM Transport Deutschland GmbH Salzgitter, the consortium includes the companies Elpro GmbH Berlin and Motion Control and Power Electronics GmbH Dresden, the Fraunhofer IVI in Dresden and the TU Dresden. Daimler Buses supports the project as an associated partner. ÜSTRA AG is involved in GUW+ as a demonstration partner. The project, which started in 2019, has a duration of 3 years.

Further information on the project can be found here: guwplus.de

Construction work on the first GUW+ has begun at the Döhren depot in Hanover at our implementation partner ÜSTRA. The structural engineering is scheduled to be completed in mid-May, after which the GUW+ plant technology will be installed. Commissioning and the start of trial operation are planned for autumn 2021.

On 26.03.2021, the shell of the 300 m²-plus operations building was completed. Over 30 lorries delivered the precast concrete parts spread over five nights, which were erected during the day. Work now follows on the building’s interior, roof and façade, which should be completed on 17.05.2021.

By 2023, ÜSTRA aims to have 48 electric buses running completely electrically on all inner-city routes within Hanover’s environmental zone. An ambitious goal – CEO Dr Volkhardt Klöppner, Denise Hain, Director of Operations and Human Resources, and Elke Maria van Zadel, Director of Technology, IT and Infrastructure, explain in the video how this can work. Part of this is our GUW+, which is presented from minute 04:39.

We reported about the start of operation of the Mercedes Benz eCitaros in Hannover here:

Batteries hold a key position in the environmental balance sheet of electric vehicles. Anyone who uses a smartphone knows the problem: regular charging and discharging puts strain on the battery, and sooner or later its capacity drops noticeably. And it’s no different in the case of fully electric urban buses. The service life of the NMC batteries used in fully electric Mercedes-Benz eCitaro buses is therefore between five or six years, by which time the capacity diminishes to approximately 80 percent. After that, the required range for urban buses is no longer guaranteed.

A long second life: drive batteries in use as an energy storage unit at a rectifier substation

However, the life cycle of a battery needn’t end upon removal from the vehicle. In stationary operations, such batteries are generally still good to use – capacity losses are less of an issue in such applications. After their intended use in vehicles, it is possible to use the batteries in a stationary application for several years, thereby increasing their economical utility value and simultaneously also the environmental balance sheet. The GUW+ project thus seeks to give batteries from electric urban buses a second life.

This pilot project’s energy storage unit offers a capacity of approximately 500 kWh and is made up of around 20 battery systems which were previously used to cover thousands of miles in the eCitaro as part of operational testing.

Mercedes-Benz Energy GmbH is a subsidiary of Mercedes-Benz AG and is responsible for the development of innovative energy storage solutions. The main focus of the business is on 2nd-life applications and energy storage using decommissioned replacement parts. Together with their partners, the company has already used automotive battery systems to add three large energy storage units to the German electrical grid, delivering a total energy capacity of around 50 MWh. The first 2nd-life batteries were brought into operation on the grid in October 2016 in Lünen, Westphalia.