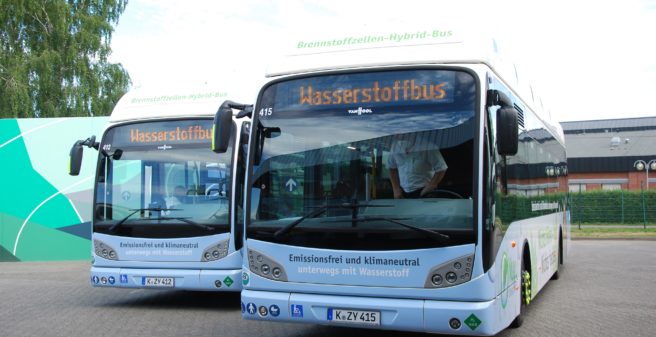 Back from the demonstration drive, RVK 415 (right) and RVK 412, the Meckenheim hydrogen filling station on the left | © Christian Marquordt

It is already a few years ago that Eugen Puderbach, head of Regionalverkehr Köln (RVK), told the author of this report: “RVK is essentially a company that is active in interurban transport. This is why our buses do not only take us to the big cities like Cologne, Bonn or Leverkusen, but also to remote places in the Eifel or Bergisches Land. In view of the current range of battery buses, we would have to be able to recharge our buses at many end stops in the countryside, and to do so we would have to build charging stations. But nobody can pay for that, not only because there would be a lot of recharging stations, but also because in many places the existing electrical infrastructure is not sufficient to operate such a recharging station. But we want to drive electrically. And there is a simple solution: the fuel cell bus. This is a bus that runs on hydrogen. In a fuel cell, it reacts with oxygen in the air to produce electricity, which the bus then uses.”

Regionalverkehr Köln received its first two hydrogen buses in 2011, two “Phileas 18” from the Dutch manufacturer APTS (Advanced Public Transport Systems). The Phileas was full of fantastic technological ideas … Just one example: it could be steered on all three axles on all wheels and thus be driven in a kind of “parallel shift” from the carriageway to the stop. This made it possible to avoid that it was not absolutely parallel to the curb …

Unfortunately, the Phileas – as is sometimes the case with technical innovations – had to struggle with teething troubles. And APTS ran out of money before they could get a grip on them. The result: insolvency. It is more than just a pity for the Phileas …

The RVK was not discouraged. The next two hydrogen buses were due in 2014. The buses which were numbered 400 and 500 were already built by Van Hool and of the type “New A 330 FC”, but as three-axle vehicles they differ clearly from the new buses (see below).

In 2019, Regionalverkehr Köln started to make the “hydrogen bus” project a reality on a large scale. 30 “New A 330 FC” type buses were ordered from the Belgian bus manufacturer Van Hool, in a joint order with the WSW in Wuppertal and the transport authority of the Latvian capital Riga, who both ordered ten coaches each. After all, RVK has known the Van Hool New A 330 FC since spring 2014, when two “prototypes” went into service. However, for weight reasons, both cars are still three-axle vehicles, quite in contrast to the buses that are now in service, where Van Hool has managed to reduce the weight too much that the buses only need two axles.

The Van Hool New A 330 FC was (and still is) the latest state of the art as Van Hool has had experience with buses with this drive technology since 2008. Since then, the Belgian manufacturer has repeatedly delivered buses with this technology to the USA. The company has therefore been very familiar with fuel cell propulsion for many years. (During the handover of the new vehicles to RVK in Meckenheim, Van Hool representatives reported that – Donald Trump sends his regards – they were no longer allowed to deliver to the USA due to the “Buy American Act” …)

Originally, 30 Van Hool New A 330 FC were ordered for RVK. At the handover ceremony on 21 August at the depot in Meckenheim, the author was astonished – it had been admitted – when suddenly and unexpectedly there was talk of 35 cars for RVK. How was that? The answer is relatively simple: Riga has withdrawn from the original order placed by the three companies RVK Cologne, WSW Wuppertal and Riga. And so five of the cars originally intended for Riga have come to RVK. (The other five went to a completely different company, namely to Aberdeen, Scotland. They were probably not very far advanced in their construction, because in Aberdeen you drive on the “other” side of the road – doors on the right side of the car would be more of a hindrance …)

The new fuel cell buses are refuelled at two new hydrogen filling stations at the RVK depots in Meckenheim (near Bonn) and Wermelskirchen (Bergisch Gladbach district). Both are designed in such a way that at least 20 hydrogen buses can be refuelled here every day. However, since the 35 wagons are distributed among the four depots in Bergisch Gladbach, Hürth, Meckenheim and Wermelskirchen, there is no depot where 20 or more wagons would be stationed.

In addition, the buses use a chemical factory in Hürth (“Chempark Knapsack”) for refuelling. Here the hydrogen is a by-product of chlor-alkali electrolysis and was simply destroyed so far by flaring until the RVK used it as fuel for its buses. This is where RVK’s fuel cell buses prove to be extremely beneficial: they finally put a valuable energy source to sensible use.

Finally, RVK’s hydrogen buses drive to two public filling stations of “H2 Mobility Deutschland” at Cologne/Bonn Airport and in Frechen. The supply of hydrogen for the buses is therefore absolutely guaranteed. Refuelling once (38.5 kg hydrogen) takes about 10 minutes and takes place under a pressure of 350 bar.

The hydrogen tank is located at the front of the roof in the form of five pressure bottles, which cover almost half of the entire length of the vehicle. The fuel cell is located in the rear of the bus under the floor.

The electricity generated in the fuel cell to power the car is stored in a battery, which is located in the middle of the car on the roof. The electric motors for propulsion are installed near the rear axle.

The presentation in Meckenheim concluded with a demonstration drive with the new RVK Van Hool Car 412 from Meckenheim via Rheinbach and the Rheinbach districts of Peppenhoven, Ramershoven and Flerzheim back to the depot in Meckenheim. The car was remarkably quiet on the road and was characterised by an acceleration capacity that would make any diesel bus look enviously behind it. At a traffic light the driver – he obviously enjoyed driving the new bus – noticed a little late that it was red, but the brakes worked perfectly.

It should also be mentioned that the new Van Hool New A 330 FC of the RVK, as is common practice today, is also fitted with driving assistants. A cyclist to the right of the bus while the bus is trying to turn right? No problem, the turn-off assistant recognises the cyclist, warns the driver and stops the bus.

For the purchase of the new hydrogen buses, RVK has received grants from:

There are also grants for tank and charging infrastructure.

These grants will enable RVK to procure a total of 50 fuel cell buses by the end of 2021 – the next vehicles with this new technology have already been ordered from Solaris.