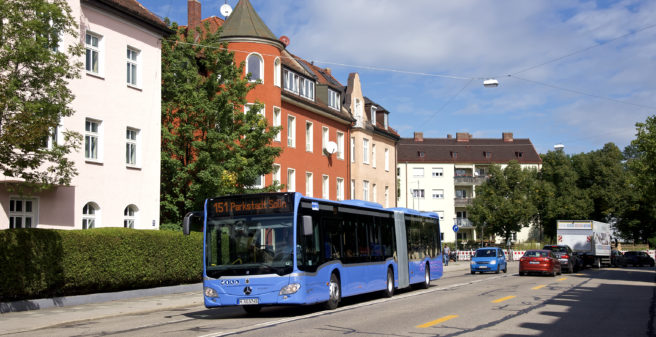 Munich’s municipal transport company MVG (Munich Transport Company, subsidiary of the Stadtwerke Group SWM) reports that 45 Mercedes-Benz Citaro hybrid articulated buses have been added to the fleet and started revenue service. Numbered 5741 to 5785, these are 18 meters long and can accommodate up to 100 passengers. They are safer than all previous buses of the MVG, because as novelty features they have a turning as well as a brake assistant installed.

The turning assistant (also known as the “dead-angle assistant”) detects whether a cyclist, another driver or a pedestrian is in the blind spots next to the bus during the crossing or when changing lanes, which the driver cannot see through the mirrors despite careful observation (so-called “dead angle”). If the assistant detects people or other “obstacles” it warns the driver automatically. On the one hand, a warning is displayed inside the car on a screen at the A-pillar and on the other hand, the driver is also tacitly alerted to the danger by the vibration of the driver’s seat.

The brake assistant detects either slower vehicles or even standing obstacles in front of the bus. This also holds for pedestrians crossing the road in front of the bus. If so, it warns not only visually via the screen at the A-pillar, but also acoustically. In addition, the bus itself initiates a partial braking, which significantly reduces the speed of the bus and significantly lowers the risks of a possible collision. In addition, the driver does remain in full control: he/she can decide for himself/herself what needs to be done given the circumstances, i.e. is an emergency braking required or has the situation been relaxed and the bus can continue as normal?

The new articulated Citaros of Munich’s MVG have a diesel engine Euro VI, which is already by definition extremely clean. As a reminder, compared to Euro 0 engines, such as those installed in buses some 30 years ago, a Euro VI engine now filters 98% of the exhaust released by a Euro 0-Motor out of the exhaust gas stream. But Munich’s MVG is still not fully satisfied with this result of the new articulated cars. To make them even cleaner, they ordered a parallel hybrid drive (“mild hybrid”), which means that an electric engine supports the diesel one: when starting and accelerating, the electric engine provides additional power. The bus itself generates the electricity for this electric engine by braking – and when driving downhill – it recuperates. This means that the electric motor acts as generator, the electricity is stored in a battery and is used again for the carriage’s propulsion the next time it starts up or accelerates.

In this way, the new Munich articulated Citaro consumes 8% less diesel fuel. And in doing so, it also saves 8% of fuel costs and – which is essential in times of climate change – 8% of the emissions compared to a Euro VI bus without the hybrid drive.

Total investment for the 45 Citaro articulated hybrid buses is approximately 15 million EUR. MVG received a grant of 4.6 million EUR under the Bavarian GVFG (Community Transport Finance Act). And at least 10 of the turning assistants installed in the new buses have been subsidized by the Federal Office of Freight Transport with 15,000 euros.

Munich’s MVG will continue to invest in new buses in 2020.

– The MVG has ordered 37 Lion’s City from MAN. They are also equipped with turning assistants and in addition, they will have a start-stop automatic: if the car stops, the engine automatically switches off and on. This also saves fuel and helps the environment, because the engine does not work useless in front of a red light, for example.

– Finally, there will be a number of new electric buses at MVG in 2020.