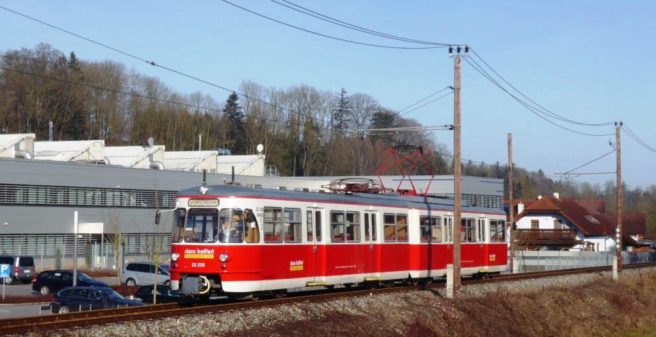 The Köln-Frechen–Benzelrather Eisenbahn (KFBE) was only able to enjoy its attractive electric trainsets locally known as „Sambawagen“ for about 15 years before the KFBE passenger service was integrated into the Cologne tram and light rail network in 1969 – today line 7 is operating here using low-floor tramways. In 1970, 8 motorcars and 7 driving trailers of the „Sambawagen“ were taken over by Austrian regional train operator Stern & Hafferl in order to substantially modernize its Linzer Lokalbahn AG (LILO) line. Refurbishing all trainsets and adjusting them to the Austrian operating conditions was done in Stern&Hafferl’s own workshops and took about 10 years (1972-1983). Until 2000 the “Kölner” as they were referred to locally, formed the backbone of the LILO operation – without these elegant and comfortable vehicles survival of this important local railway line would have under serious doubts.

In 2023/24 the “Sambawagen” from Cologne will have been in railway service for 70 years – their replacement by modern TramTrains from a German-Austrian joint order is planned for 2025/26. Let’s hope that one of the „Sambawagen“ will survive and return to its home town Cologne, although it’s worth mentioning no. 1019 (similar to ET 22.137) is already preserved at Tram Museum Thielenbruch in Köln.