50 years of metro – and a new tram: Nuremberg 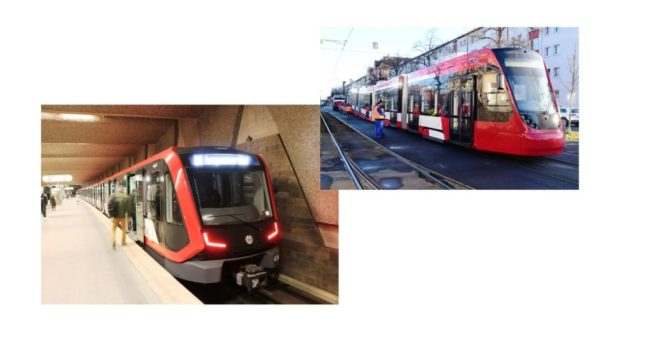 Nuremberg’s first metro service started operating in the new district of Langwasser in the east the city – new urban area built in the 1960s and 1970s. Seven stations were located along the first 3.7 kilometres between the underground stations Langwasser Süd and Bauernfeindstraße.

Today, Nuremberg has three underground lines with 49 stations and a network of 41 km. Another two stations are currently under construction – for the U3 line in the southwestern part of the city. They are expected to start operation in 2026. After Berlin, Hamburg and Munich, Nuremberg became the fourth German city with a fully seperated metro network. It is still the only one in Germany with two fully automated, driverless underground lines.

After previous plans for a Frankfurt-style underground tramway system, Nuremberg’s city council voted in favour of a “real” underground in November 1965. About one and a half years after this decision was made, on 20 March 1967, metro construction work began: Nuremberg Mayor Andreas Urschlechter and Federal Minister of Transport Georg Leber joined the official construction start ceremony at Bauernfeindstraße. After the first U1 line, which was extended to a total of 19 km by 2007, the first sections of the U2 were added in 1984 and the U3 in 2008. Today, the U2 and U3 are operated driverless, which means that passengers can look out of the front of the train during the journey! The metro fleet is currently in the middle of a process of ongoing renewal: VAG is investing in 35 new underground train sets from Siemens Mobility to replace older vehicles. 25 of the new articulated trains are already in service. In return, older vehicles of the DT1 and DT2 series are gradually being taken out of service.

The metro has partly replaced the tram, but its a decision to modernise and expand the tramway network was made quite some time ago. The first of the 26 (originally 12) Siemens Mobility AVENIO four-unit trams currently on roder has just been unloaded in Nuremberg. After test runs and driver training they are expected to enter passenger service in autumn. The Avenio is produced by Siemens in Kragujevac, Serbia. The next unit will arrive in Nuremberg by low loader in April – it is currently being assembled, and tohers are under construction. Two trams are still at the Siemens test centre until early summer, when all performance tests should have been completed.

We already reported on the new Avenio in detail here: