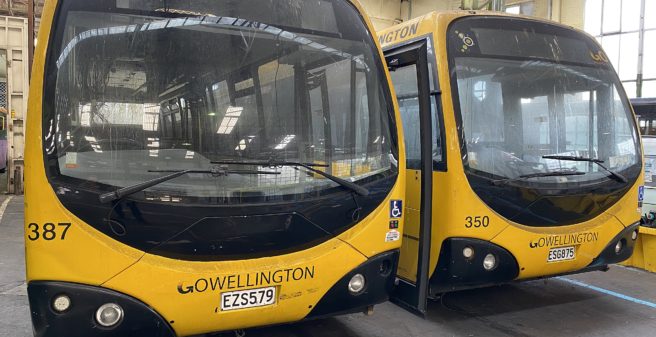 The end of the line: More than two years after the closure of the 50 km long trolleybus network in New Zealand’s capital city Wellington on 31.10.2017, the fate of the remaining 56 trolleybuses has been sealed: all were sold to a commercial vehicle dealer, who now offers them mostly without interior design elements and after removing some essential parts of the electrical equipment for purchase as scrap. Trolleybuses 331 and 332 and two others have already been sold. The minimum bid is 10,000 NZD (approximately 6,500,- EUR). Most of the Trolleybuses will thus be reused as holiday homes or warehouses and therefore will most likely end up at scrap dealers around the country in the medium term. They all are out of a series of originally 57 three-axle, low-floor trolleybuses of the “Designline” model, which help to fundamentally modernize the trolley fleet between 2007 and 2009. All would certainly have been operational for at least another 10 years. However, under political pressure, the entire network was abandoned in 2017 and the infrastructure got immediately removed, without even considering a conversion to battery buses with in-motion charging technology, simply by installing more powerful traction batteries.

As all efforts to convert the trolleybuses into to hybrid buses failed, only one bus, no. 361 which had been converted into a battery hybrid bus in2018 with Chinese technology, is currently operational and in revenue service.

For more information about the subject see here: https://www.urban-transport-magazine.com/en/new-zealand-55-modern-trolleybuses-out-of-service-for-2-years-now/