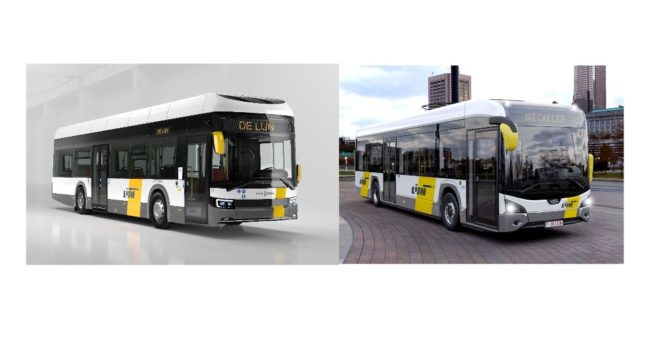 “De Lijn” (the line) is responsible for regional transport in the Flemish (Dutch-speaking) part of the country. The company is in the process of converting bus transport to alternative drives. The company has signed delivery contracts for 60 new electric buses. VDL will deliver 24 of its new type Citea LF-122 (LF-122 = low floor, length 12,200 mm), the other 36 will come from the Belgian manufacturer Van Hool.

The VDL Citea LF-122 will be delivered partly as two- and partly as three-door vehicles. VDL will build them at its plant in Roeselare, Belgium (formerly the plant of the Belgian coachbuilder Jonckheere, which has been merged into VDL). They have a battery pack with a capacity of an impressive 490 kWh. Which should help them achieve a no less remarkable range. And VDL is in the process of setting up a production line in Roeselare where the electric buses can be built in an energy-neutral way.

With this order, VDL will exceed the threshold of 1000 buses delivered to the Flemish part of Belgium since 2015.

The new VDL Citea LF-122 is characterised by a number of special features that stem from the fact that the new generation of the Citea has no longer been developed as an ‘all-round car’ for all types of propulsion, but exclusively as an electric (battery) bus. Great importance was given during the development phase of the new Citea being able to carry as many passengers as possible, e.g. by reducing the weight using less steel components. The 12.2-metre version of the Citea can carry at least 110 passengers, at least 45 of whom – regardless of the specific equipment – will find a seat. 45 seats in a regular service vehicle of about 12 metres in length: that’s really not bad.

The real “revolution” of the new VDL Citea, however, is that it no longer has its batteries on the roof or where a diesel version of the type would have its diesel engine. Rather, the batteries have moved under the floor of the passenger compartment. This not only lowers the bus’ centre of gravity, but it also allows for more battery space, and this increases the charging capacity of the bus’ batteries significantly.

Well, we now know 24 of the new electric buses from “de Lijn”: the VDL Citea. And what about the remaining 36 vehicles?

They come from the Belgian manufacturer Van Hool, based in the Koningshooikt district of the city of Lier (province of Antwerp). The story of Van Hool’s origins is remarkable enough: In the years after the Second World War (1947), farmer Berrnard Van Hool needed a vehicle with which he could take his farm workers to the fields. He constructed and built the appropriate “bus” with its own means – and he had not really thought of anything else. His fellow farmers, however, saw the Van Hool “bus” und pushed Bernard Van Hool to build more of them….that’s how a world-renowned bus manufacturer started!

A few years ago, Van Hool opened a branch factory in Skopje, the capital of North Macedonia. Up to now, the “EX” series coaches have been produced here. Now the electric buses for “De Lijn” will also come from Skopje. However, Van Hool might build electric buses at its main plant in Koningshooikt in the future, too.

With the new electric bus, Van Hool is also presenting a completely new family of city buses, which not only clearly differs from the previous series in terms of styling. The model designation also differs from what we have known from Van Hool so far: while the previous series were called A 300, A 330, A 500 and A 600 (etc.), the new 12-metre long type is now called “A 12”. Other types and sizes will soon be launched, too.

From 2022, the new A 12 will be produced as a pure low-floor bus and in a low-entry version. Like some other manufacturers in the meantime (Ebusco and VDL should be mentioned here), Van Hool will no longer offer the new bus family with combustion engines, but only with electric drive, either via battery, whose manufacturer will be Akasol from Darmstadt, or via fuel cell (which will come from Ballard). Van Hool already has more than ten years of experience in the construction of hydrogen buses.

The charging infrastructure for the new electric buses of “de Lijn” will be supplied by the manufacturers Spie-Ekoenergetyka and Heliox.