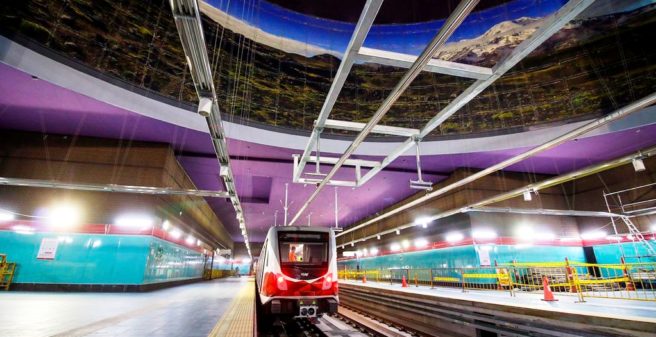 It is the biggest infrastructure project in the country for years – and it will soon become a symbol for the country’s modernity: This is how the construction of the first metro line in the capital Quito is being described by those Ecuatorians, who are involved in the project.

Planning, preparation and finally the actual construction work for the first metro in Ecuador have been going on for almost 20 years. For a long time, there were discussions about the route and the construction in the geologically and geographically challenging area, but now the work is actually nearing its foreseeable completion. According to the metro company, the construction is 99% finished. And if all goes according to plan, trial passenger services will begin in December 2021 before commercial services can start next year. The construction work was marked by the need for special precautions to protect the numerous buildings in Quito’s historic, UNESCO-protected old town. This was the main reason for the long contruction phase. Construction itself began 9 years ago. Tunnel boring machines were used on approximately 80% of the completely new underground section. Because of the seismological challenges on site, the entire system is designed to be earthquake-proof up to a value of 7.8 on the Richter scale.

The total investment costs amount to approximately 1.5 billion USD, which is financed to a large extent by long-term loans provided by the World Bank group, the European Invest-Bank (EIB), the Corporación Andina de Fomento (CAF) and the Inter-American Development Bank.

Line 1 of the Metro de Quito will operate over 22 km between Quitumbe and El Labrador, serving 15 underground stations, each of them with 150 m long platforms. Five will be major interchanges to surface mass transit. Riding over the entire length of the route will only take 34 minutes, with the trains operating every 4-8 minutes at a maximum speed of 100 km/h on some sections of the route.

18 trains were ordered from CAF in Spain, each consisting of 6 carriages and walk-throughs. All the trains were delivered to Ecuador between 2018 and December 2020.

The trains are 109.1 metres long and can accommodate up to 1,259 passengers (6p/m2). Power is supplied via overhead conductor rails in the tunnel and at places outside, such as at the depot entrance, and in the depot itself by conventional overhead lines, at 1500V=. The track gauge is 1,435mm.

Since March 2019, test runs are taking place first in the depot area, then on sections of the line, which were then extended to cover the entire length of the route. This allows for test simulations of “real” running trains in the second half of the year. It will depend on the test findings, whether passenger service can begin as planned in December 2021.

A new quality of public transport in Quito

The introduction of the metro will enable a reorganisation of the public transport system in Quito with the clear objective to reduce traffic congestion, significantly improve service quality and reduce travel times. The surface public transport system is essentially based on a Bus Rapid Transit BRT system, which was initially introduced in 1995 as a trolleybus system, with Mercedes-Benz/Kiepe O 405 GT high-floor trolleybuses for elevated platform access. 113 of the trolleybuses were purchased between 1995 and 1999. However, mainly due to a lack of funds, Quito later acquired numerous diesel buses for the expansion of the BRT system, and eventually a considerable number of the now more than 20-year-old trolleybuses were also replaced by motorised buses, despite the comparatively low energy efficiency of diesel buses in a city located at 2,850 m above sea level.

The new metro will certainly be able to make a significant contribution to relieve the bus system and to significantly increase the quality of public transport services in Ecuador’s capital region. Residents had to wait far too long for this, but it should be ready in a few months.