A fourth tramway line in Bordeaux 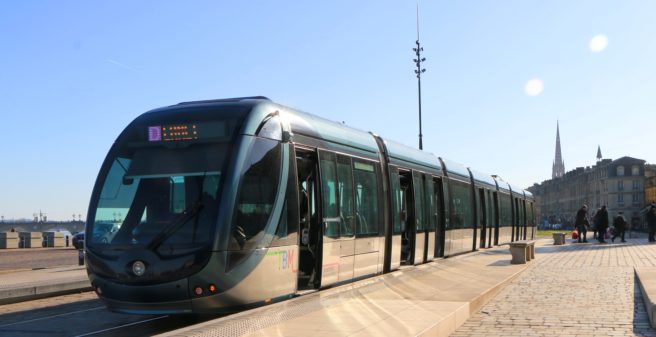 The tramway system of Bordeaux in South-Western France continues to grow. On 14 December 2019, line D has been added to the network with a 3.5 km new line to Le Bouscat which is located in the north-west of the city centre. The “Mairie du Bouscat” is only the temporary terminus of line D which will be extended by 9.8 km to “Cantinolle” in Eysines in the north-west in mid-2020, thus completing the 3rd phase of construction of the Bordeaux tram network which was inaugurated in 2003. The cost of works on this new line D between “Quinconces” and “Cantinolle” amounts to 250 million Euros. One of the objectives of the project is to offer an efficient mode of transport alternative to the private car.

This first section of line D, which extends over 3.5 km runs parallel to line C from “Carle Vernet” station until Quinconces where it bifurcates to Le Bouscat. It serves in particular rue Fondaudège, the Médoc barrier and its many shops, large housing sectors, the Museum, the Gallien Palace, the Bordeaux park, several schools and the Bordeaux public garden.

The Decree of Declaration of Public Utility (DUP) was signed by the prefect on 30 November 2011. The infrastructure and rail works were carried out between 2017 and 2019. Testing started in August 2019. The inauguration took place on 14 December 2019.

Alongside the new tram line, a total of four car parks with a total of 372 place have been installed for Park+Ride purposes. The boulevards the tram is running on, have been entirely rearranged and fitted with bicycle paths wherever this was possible. Further to this, 144 bicycle racks as well as four rent-a-bike stations (locally called V3) have been installed

Bordeaux Métropole, installed a specific Settlement Commission which was in charge of the claims from merchants and shop owners during the construction phase for compensation of lost profit. A total of 552 cases were investigated for a total amount paid of 5.7 million Euros.

For years already, Bordeaux Métropole has set up an compensation scheme for businesses and merchants bordering tramway worksites. Professionals who believe that they have suffered real damage during the work can file a compensation file.

The construction phase of the new tram has been accompanied by archaeological research. On a length of 2.5 km, specialists analysed a total of 362 m2. Many objects of the medial age and the 16th century were found.

The project was lead by the Directorate General of Mobilities of Bordeaux Métropole. The TISYA Group was responsible for the overall project management and included Systra / Artelia / Verdi / Ingerop / BLP / Signes, with the support of Kéolis Bordeaux Métropole. The town halls of Bordeaux and Bouscat, particularly in terms of mediation throughout the project, played an important role in terms of consultation and work.

Phase 3 of the Bordeaux tramway

The phase 3 of the Bordeaux tramway consists in 33 km of additional tram lines which adds to the 44 km already in operation. This project includes the extensions of lines A, B and C, already in service, as well as the development of line D, partial services and the extension of the platforms of line C in the city center. The phase 3 represents an overall investment estimated at nearly 1 billion Euros at its completion, and should be completed by 2020 with the commissioning of line D to Eysines. Once completed, the Bordeaux tramway will have a total length of 77.5 km, which will make it one of the longest tramway networks in France. Further feasibility studies are also underway already as part of the Metropolitan Transportation Master Plan (SDODM) with the objective to expand the public transport network.