A hydrogen bus for Dormagen 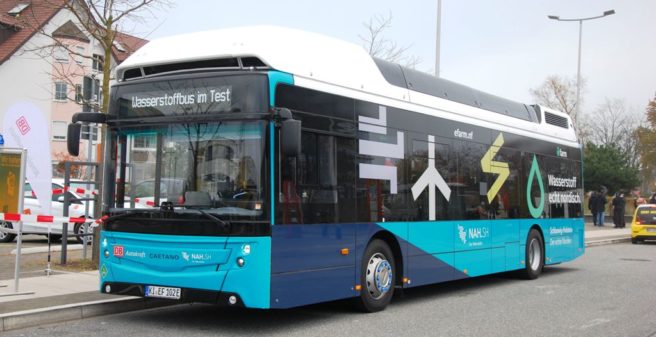 On the left bank of the Rhine between Cologne and Neuss you will find the city of Dormagen, an important location for the chemical industry in the federal state of Nordrhein-Westfalen (North Rhine-Westphalia). Dormagen is by no means a small town, but between a neighbour to the south, Cologne, which is immediately adjacent and has a million inhabitants, and a neighbour to the north, Neuss, which is also a large city with approximately 160,000 inhabitants, it is difficult to get noticed.

As early as 1997, Dormagen – like other cities of comparable size in region Nordrhein-Westfalen, such as Detmold, Euskirchen or Hürth – got its own city bus system. Initially, low-floor Neoplan N 4011 midibuses were used, although Dormagen’s municipal bus company has never owned its own buses. Instead, DB subsidiary Busverkehr Rheinland (BVR), based in nearby Düsseldorf, provided the buses for the city lines. Soon the midibuses became too small for the city traffic in Dormagen, and “full-grown” 12-metre buses came to the chemical city. Of course, all city buses still run on diesel today.

At present, 13 buses are in service on Dormagen’s city lines. But the city is preparing a significant expansion of the service which will require 21 buses in the near future. However, these new vehicles will still be “only” hybrid buses. Incidentally, an on-demand service will also start in Dormagen in December.

Dormagen has a very large chemical factory, the “Chempark”, which not only produces hydrogen, but is soon expected to have Europe’s largest hydrogen plant. Accordingly, the city is now planning the future with hydrogen (hydrogen) buses in the interest of climate protection.

In November, a first test vehicle arrived in the city, a “H 2 City Gold” model from the Portuguese manufacturer Caetano, on loan from DB-owned operator Autokraft, which was used in service on lines 881 and 882. Both lines run – on different routes – between the city centre (station) and the Hackenbroich district.

On 12 November, the test bus was presented in front of the station. Dormagen’s mayor Erik Lierenfeld said: “This pilot project is an important step towards an emission-free future for the city of Dormagen. Hydrogen offers enormous potential, which we want to use. The planned construction of a large hydrogen plant in our city offers the best conditions for city bus transport.” And Bernd Strehl, regional manager of “DB Regio Bus NRW”, added: “Sustainability is our brand essence, which is why we set ourselves ambitious goals in climate protection. The hydrogen bus is another element to get closer to achieve these goals at Busverkehr Rheinland (BVR).“

In view of the bus’s range of 400 kilometres, it was emphasised at the presentation that the hydrogen bus can easily manage all courses in the Dormagen city network and thus also longer round trips without having to refuel on the way. The longest route in the network covers 300 kilometres per day. Refuelling takes only a few minutes – in contrast to a battery bus, which can take three to four hours to recharge overnight.

The future hydrogen city buses in Dormagen will – of course – be refuelled at the “Chempark”. The filling station is planned at Gate 14, and the future location was already presented during the demonstration run. However, the filling station does not yet exist, so the bus had to continue its trip to neighbouring Düsseldorf to refuel.

Fuel cell by Toyota, power 60 kW, on the roof at the rear

Storage battery cells on the roof at the front

Range of the bus per tank filling: 400 kilometres