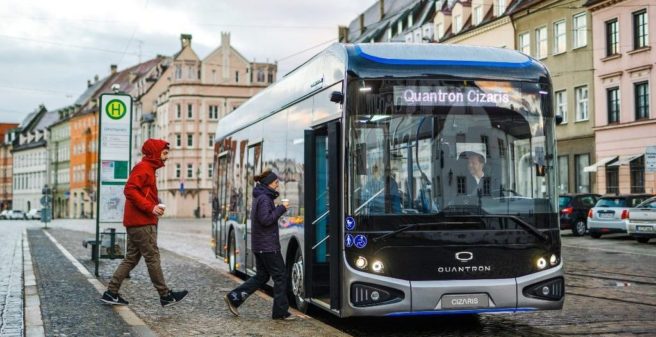 On 16 February – due to the pandemic – a completely new electric bus was presented on the internet: Quantron AG from Augsburg showed their “Quantron Cizaris 12 EV”.

Quantron? The name doesn’t sound familiar yet? But the company is not that new anymore. It was founded in 2019, and initially it was involved in converting vans and commercial vehicles from diesel to electric. It was in good company with “Etrofit” (today: Pepper Motion) from Denkendorf near Ingolstadt and “I see buses” from Enge-Sande in the far north of Schleswig-Holstein.

But now Quantron is taking a decisive step further: from being a “converter”, it is now also becoming a supplier of complete new electric buses. Quantron speaks of “the new normal” in connection with electric buses. And: “We want to change the future sustainably.”

The nucleus of the company is the family business Haller from Gersthofen near Augsburg, which was founded 140 years ago, in 1882. Right from the start, Haller got involved in the maintenance and sale of automobiles. The author and his wife were present when Haller, as a contractual partner of Iveco, handed over a number of brand-new buses to Regional-Bus Augsburg in February 2011 …

As said, in 2019 Quantron AG, based in Augsburg, joined Haller, which kept its headquarters in Gersthofen. The CEO of Quantron is Michael Perschke, the chairman of the board is Andreas Haller, a scion of the founding family. He has been in the bus sales and maintenance business for 10 years now, and now he has also become a bus manufacturer.

Quantron presented its first own bus, which it offers brand-new from its own production, with the words: “We are pioneers in the electric business.” With the Cizaris, they said at the presentation, they are competing to make the price difference between diesel and electric buses smaller. In other words: with the Cizaris, Quantron wants to offer a vehicle that is priced below the electric buses known so far. However, the company emphasises that it is working with leading suppliers.

“At Quantron,” says the manufacturer, “electric mobility is no longer a question of price, but first and foremost a decision for a sustainable and quiet alternative.”

“aris” is derived from the Greek and means “the noblest, the best”.

The technology of the bus

The “Cizaris 12 EV” is available as a two- or three-door bus. A wheelchair ramp at the centre door is a matter of course.

The traction current is stored in Quantron’s own battery system “Q-battery”, which comes with an eight-year warranty. The range of the trolley was determined according to the specifications of the eSORT (Standardised On-Road Test for Electric Vehicles) with 360 kilometres, a value that is completely sufficient for almost all operations within 24 hours in an urban transport operation, Therefore, recharging on the line is not necessary, one looks in vain for a pantograph on the roof of the Cizaris.

At the same time, Quantron is not the only manufacturer that can now offer an electric bus with this range. Gone are the days when it was said that if you couldn’t recharge on the road, you would very often have to replace the buses because the batteries were flat …

Quantron has the naked body-in-white of the Cizari manufactured by “EV Dynamics” in Hong Kong. Accordingly, “EV Dynamics” also has a visually almost identical electric bus in its range. Quantron emphasises that the body has been “tried and tested a thousand times over”. And because “EV Dynamics” comes from Hong Kong – and thus from an area of the world with left-hand traffic – the Quantron Cizaris 12 EV can of course be delivered as a left- or right-hand drive. The bodyshell is shipped to Germany and becomes the finished bus here at Quantron. Here it gets its electric motor from the US manufacturer DANA, here it gets its axles, which also come from DANA, here the seats from the renowned German manufacturer Kiel are installed.

The Cizaris is recharged via a CCS combo plug, which is connected to the car on the right-hand side at the very rear. Due to the range of the car, recharging is actually only necessary overnight at the depot.

Quantron supplies the “Cizaris” with assistance systems such as anti-lock brakes, electronic braking system, anti-skid control and electronically controlled suspension ECAS. A turning assistant, which stops the car if a cyclist or pedestrian is next to it when turning, can be supplied on request.

Where the bus has its batteries, and in other high-voltage areas, the Quantron Cizaris 12 EV is equipped with a fire alarm system and powder extinguishing cartridges…

Initially, the Quantron Cizaris 12 is only available as a battery-electric bus (Cizaris 12 EV), but the hydrogen-powered version with fuel cell (Cizaris 12 H) is to follow soon. Quantron rightly pointed out at the presentation that the electric drive is the same for both the battery and the hydrogen bus, the only difference is where the bus “takes” its traction current from. The hydrogen bus will be equipped with fuel cells from the Canadian manufacturer Ballard.

The passenger enters an interior that is attractively designed in light and friendly colours. Colour accents make it easier to find one’s way around the vehicle. A fold-out wheelchair ramp at the centre door does not even need a special mention nowadays.

The floor is insulated with aluminium and the grab rails are made of stainless steel. USB connections for the passengers next to and under the seats are included.

Air conditioning is also (almost) a matter of course for a bus today. And so, of course, it is also available in the Quantron Cizaris 12 EV. It works with a heat pump with an output of 20 kW, its cooling capacity is 33 kW. The driver can individually air-condition his workplace according to his wishes, independently of the passenger compartment.

Support through the “Quantron Ecosystem

And Quantron emphasises that the car will be fully supported by the “Quantron Ecosystem” after delivery.