A new generation of trolleybuses in Montreux 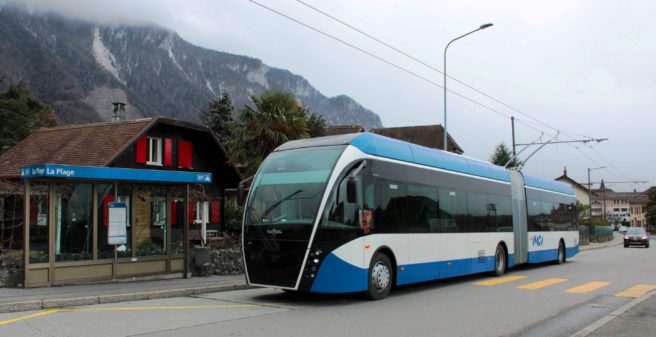 The 12.7 km long interurban trolleybus line between Vevey, Montreux and Villeneuve along the scenic Lac Lemon coastline has seen a complete change in appearance: 16 Van Hool/KiepeElectric „ExquiCity“ articulated trolleybuses with extended off-wire capabilities replaced the 25 year old previous generation of traditional trolleybuses. The line was extended by a few kilometers to Rennaz, and especially for this new part of the route (numbered 201) the vehciles use their powerful traction batteries. They get recharged when the bus is again running under the existing overhead; another good example of the „In-Motion-Charging“ (IMC) concept.

The service to Rennaz started on 15 December 2019, with a daytime frequency of 10 minutes. However, because of the late delivery of the first ExquiCity buses, a temporary mixed trolleybus/dieselbus operation had to organized. This interim solution is now coming to and end, because in the meantime all 16 new vehicles were delivered and are now taking over the regular service. The buses have the numbers 801-816.

Almost all of the Van Hool/Kiepe AG 300 T previously in use on the line were taken out of service on 14 December 2019. Only two of them continued to operate for a few more weeks, in which they occasionally fulfilled some extra rush-hour duties. Altogether, 18 buses of this then new trolleybus generation were bought new by the operator Transports publics VMCV in 1994/96. As it turned out that only 9 or 10 buses were needed on the trolleybus route, two of them were sold to Salzburg in 2008. (no.2 & 15 => Salzburg no. 260/261).

The trolleybus route between Villeneuve and Vevey replaced the former tramway service in 1957/58. The first generation of 18 trolleybuses and (since 1963) 9 trailers provided all services on the line for more than 35 years.