A new streetcar in Arizona: Tempe! 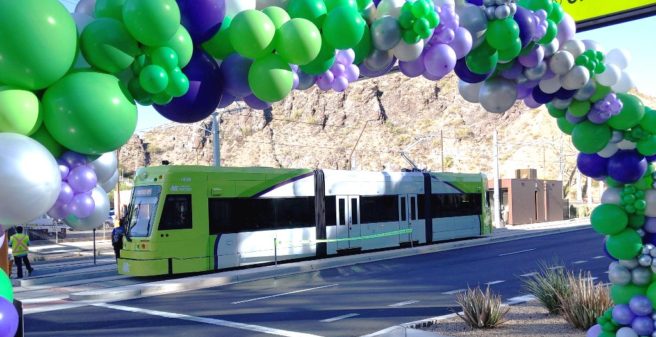 In the past three decades, urban rail transport in the USA has experienced a remarkable renaissance. While in the beginning it was mainly large-scale light rail systems, a number of systems have since been added that follow more or less European standards of modern of low-floor tramway systems. In the USA, these are usually referred to as “streetcars” and often include street-running in densely built-up inner cities. Distance between the stops is shorter than in case of the traditional light rail systems, and apart from some heritage vehicles and/or replicas, modern low-floor trams mainly operate the streetcar lines.

The newest streetcar system has just been opened today, 20 May 2022 – in Tempe, Arizona. It includes direct connection to Phoenix’s “Valley Metro Rail”, which has been operating in Tempe since 2009 and, after various extensions, has now grown to a length of almost 42 km. Further extensions are planned and under construction, and the fleet was expanded last year with the first Siemens low-floor cars – we reported here:
https://www.urban-transport-magazine.com/en/another-14-light-rail-vehicles-for-phoenix/

The new Streetcar line in Tempe is, in comparison, quite modest in size with a length of only 4.8 km and serves 10 stops in each direction. Part of the line is operated without catenary, and therefore the six articulated vehicles have suitably powerful lithium-ion traction batteries on board. Brookville Corp. Started supplying the cars to Tempe in February 2021, and test runs have been taking place on the line for some months. The streetcars are of three-section design with two doors in the centre section only and can accommodate up to 125 passengers. The overall length of just over 20 metres. These six „Liberty NXL“ trams cost USD 33 million, out of a total budget of USD 201 million for the line, including infrastructure, depot facilities and rolling stock. The funds come from federal and regional grants as well as a PPP financing model.

Like the light rail in Phoenix, the streetcar in Tempe is operated by Valley Metro Rail. The trams operate every 15-20 minutes – a relatively low frequency on this short line. Passengers enjoy free-of-charge ride at least during the first 12 months of service.

If the new tram line is well received and ridership numbers increase, extensions in several directions are already considered.

A map of Metro Valley at Greater Phoenix area is available here:
https://www.urbanrail.net/am/phoenix/phoenix.htm