A Tram-Train for Tarragona 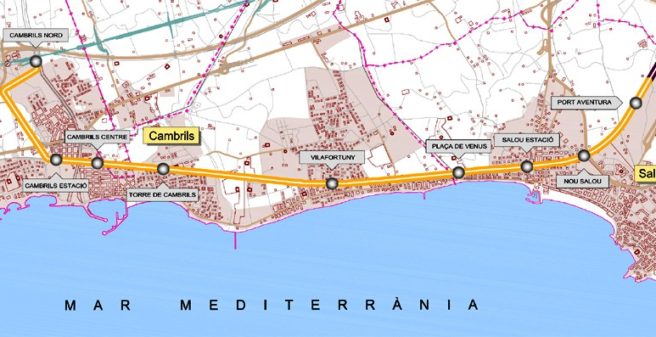 It has been discussed for years, different ideas and plans have been presented to the public, and later modified and rejected, but now finally there seems to be hope to kick-off the project in a reasonable period of time: We are talking about the tram-train system in and around the city of Tarragona, located in the region of Catalonia in the northeast of Spain. The metropolitan area itself is also called “Camp de Tarrogona”.

For the approximately 137,000 inhabitants in the city itself and approximately 325,000 in the  area, the public transport system has been quite limited so far: Apart from the city buses only a few suburban train lines offer connections within the area and to the regional capital Barcelona which is 95 km away from Tarragona. Individual car very much dominate in the modal split, and public transport use is significantly lower than in other simlar provinces of the country.

The project was given new impetus some time ago when the railway line between Valencia and Tarragona along the coast was relocated to a route further north in January 2020. For long-distance traffic, this certainly has its benefits, but for the coastal towns of Cambrils and Salou this means the loss of a fast, direct public transport connection to Tarragona and Reus. Mainly protests by the local population accelerated long-lasting plans to final implement a Tram-Train scheme better known in Spain as Tren-Tranvía or Tren-Tram. Potentially available EU funds might help to speed up the project, too.

Long-term planning foresees the implementation of a 46 km long network with 34 stops between the cities of Tarragona, Cambrils and Reus – branded as “TramCamp”. The project involves both newly built sections along the lines in some densely populated areas as well as the use of existing, partly abandoned railway lines. For this reason, the implementation of 1,668 mm Iberian broad gauge was considered for a long time, in order to keep open the option of a combined service on state railway lines and its own, new tracks.

The first section – Phase 1 – is now to be built as soon as possible on part the unused railway track bed along the abandond coastal route. Between Cambrils Horta de Santa María and Port Aventura / Salou the old railway track will be converted for tram-train operation and newly built sections to Cambrils railway station and from Port Aventura to Vila-seca train station will be added. The prospect of EU subsidies for the country is accelarating the project, and new announcements by the Catalan regional authorities forsee the start construction as early as 2023. Whether it will really happen that fast remains to be seen – in any case, due to the current favorable circumstances, the realization of the project has definitely come a lot closer. The detailed planning process is to be completed this year, and tendering will start shortly.

Investment costs for phase 1 are estimated at €145 million, including vehicle procurement and depot facilities. The total project is currently expected to cost approximately €550 million.

The future operator Ferrocarrils de la Generalitat de Catalunya (FGC), the Catalan Regional Railway Service, has announced to start a tendering process for a first series of tram-train units that will be needed to start the service. The exact specifications are currently being worked out. The requirements on the vehicles have recently been subject to changes because the implementation of the system in European standard gauge has just recently been dtermined. This, however, will make direct connections via the existing railway lines hardly realistic even in the long term. The smaller gauge has been justified by an easier urban integration and the possibility to buy standard gauge tram-train vehicles.

After the first phase Cambrils – Salou – Vila-Seca, several further stages are planned, first of all the connection and integration into the urban area of Tarragona and via two different routes also to the neighbouring city of Reus (106,000 inhabitants). A branch line to the airport is part of the plans, too. There have always been close links between the two large cities of the region, Reus and Tarrogona. Between 1952 and 1973, a trolley bus service was operated which did not proof to be very reliable. Tarragona had a small horse-drawn tram between 1883 and 1896, but no electric tramways. Worth mentioning is a metre-gauge railway line that connected Reus with Salou until 1975, in the final years operated with diesel railcars.

A concrete timetable for the realisation of subsequent phases of the tram-train project TramCamp has not yet been published. The first such system linking a railway line with tram operation in the urban area has been under construction in the Cádiz-San Fernando-Chiclana area for many years and is now finally scheduled to open in the summer of 2022. Perhaps this will help to accelerate the plans in Catalonia, too.