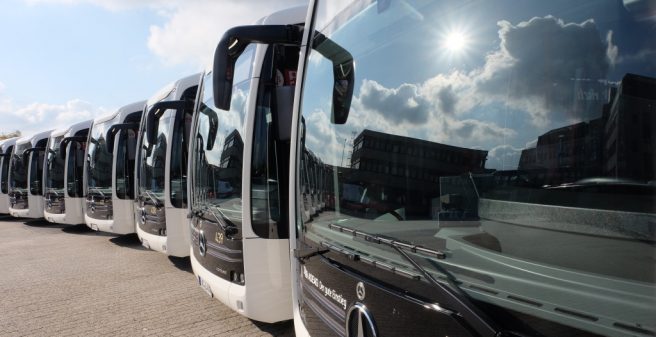 Aachen is the next German city to receive new electric buses from Mercedes Benz. The first seven eCitaro vehicles have been handed over to the ASEAG transport company on 29 October 2019. Mercedes‑Benz has received another major order for the eCitaro: Aachen’s transport company ASEAG is ordering up to 27 all-electric, locally emission-free low-floor urban buses.

The two-door eCitaro models will have top-of-the-range equipment with twelve high-voltage battery packs. This provides a total capacity of 292 kWh. The extensive safety technology deserves a special mention: the urban buses will be equipped with both the Preventive Brake Assist active braking assistant and Sideguard Assist. These assistance systems support bus drivers and, above all, protect more vulnerable road users. In the passenger area of the urban buses, the signal red hand rails really stand out. Passengers sit down on City Star Function seats and are provided with information via a 29-inch TFT screen.

The ASEAG (Aachener Straßenbahn- und Energieversorgungs-AG) is an all-bus organisation with 101 bus routes and transports around 71 million passengers annually. Due to its location close to the German borders with Belgium and the Netherlands, a number of bus routes cross borders. The Mercedes-Benz Citaro forms the backbone of the company’s fleet of 230 buses. ASEAG uses both solo and articulated Citaro buses, and also has seven Mercedes-Benz CapaCity four-axle buses for maximum passenger capacity.