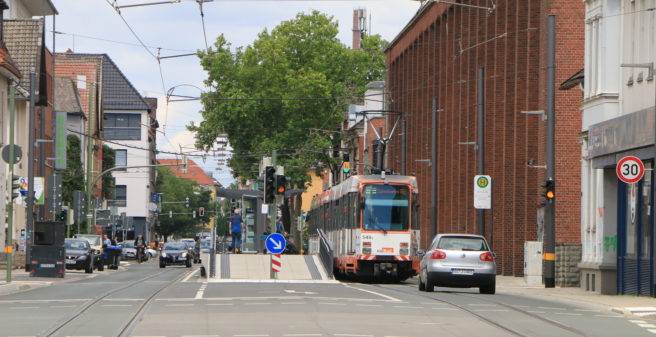 Bielefeld is something special – yes, many citizens of Bielefeld would agree on this… they might think of the pleasant quality of life in their city, rather unknown for the outside world. But the city is also special because of its urban rail transport system: It has the only narrow-gauge light rail with elevated platforms in the entire country. It was gradually upgraded from the former, traditional metre-gauge tramway and it includes a 4 km long tunnel section in the city centre.

However, construction of more elevated platforms at all stops is a time-consuming challenge. To allow barrier-free access at all stops, additional elevated platforms need to be built gradually, even if their urban integration is not always easy to achieve – in any case, it is a time-consuming challenge. The last new additions were the completely redesigned stations Krankenhaus Mitte and Marktstraße on line 3, in service since December 2019. The new Marktstraße stop replaced the previous stops August-Schröder-Straße and Ravensberger Straße and is located adjacent to line 4’s new terminus Dürkopp Tor 6 – also in service since 2019 (see our report: https://www.urban-transport-magazine.com/en/strassenbahn-zum-tor-6-in-bielefeld/). The reconstruction of the Sieker-Mitte stop along line 3 is scheduled to start in autumn 2020 and should be completed  in 2021. As a consequence, nearby Hartlager Weg station will be closed, which has led to controversial discussions among the local population. Furthermore, August-Bebel-Straße and Teutoburger Straße (Li. 2) and Langestraße (L.3) remain as the last non-barrier-free stops of the network, however, the planning for the construction of high-level platforms has started already.

For 2022, the start of the reconstruction of the small Hauptstrasse in the city’s Brackwede district is foreseen, as part of a further redevelopment project of the entire area. However, as the tracks here were already in urgent need of renewal, Bielefeld’s operator “moBiel” was already forced to interrupt the service on route 1 twice this year and initiated a comprehensive track construction. Meanwhile, the Stadtbahn line 1 ended at Gaswerkstraße or at Obernstraße and passengers had to change to the extended bus line 135 to Senne, most recently from 27 July to 9 August 2020.

Since July 2020, the remodelling of the city center has also affected the central Jahnplatz in order to facilitate the transfer between bus and train services in the future.

In addition to the improvement measures of the existing network, Bielefeld has also developed various plans for route extensions. Several studies produced over many decades illustrated the possibility to connect the satelite city Sennestadt, which was built in the 1960s, to the light rail starting at current Senne terminus of line 1. A comprehensive citizen participation was completed recently and the design planning with several variants for the realization of the line is now being finetuned. The final decision on the planning is not expected to be reached before 2022, and its commissioning will not take place until 2025, at the earliest.

Plans for the extension of line 4 from Lohmannshof, some 1.3 km to the new university campus area Hochschulcampus II Nord at Schlosshof-/Dürerstraße are much more advanced. Construction is expected to start next year.

The connection of the Hillegossen district to the network is subject to a feasibility study in which different route variants are examined. Extensions of line 3 from Stieghorst or line 2 from Sieker along Detmolder Straße are the alternatives to be further investigated. The re-urbanisation project of the former “Catterick barracks” on the latter one might lead to additional passenger potential. The selection of the preferred option for the light rail extension to Hillegossen is expected to be made in January 2021 – as part of the official, legal planning and documentation procedure.

Further expansion plans, e.g. to Theesen-Jöllenbeck and Heepen are part of the long-term planning, as well a the suggested construction of a branch line of line 1 to Brackwede Süd and from the future university campus North to the terminus Babenhausen Süd of line 3.

The procurement of another 24 new VAMOS light rail cars supplied by HeiterBlick will lead to the replacement of all old Düwag M8C (from 1982-1987) in the course of 2021. Some of them could be transferred to the Polish city of Łódź. By the way, part of the fleet of new VAMOS will no longer have folding steps, so they can only be used on routes with elevated platforms at all stations.