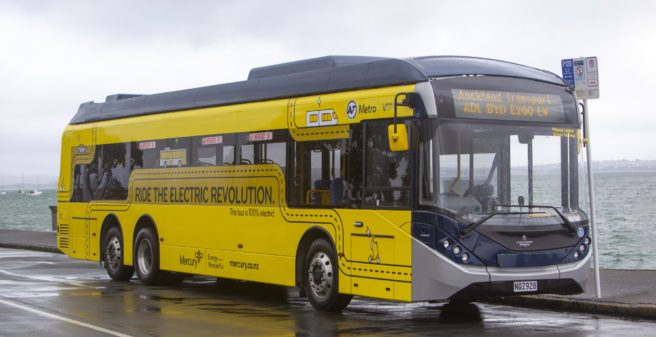 The BYD ADL Enviro200EV XLB is a further evolution of the successful combination of ADL’s expertise in tailoring buses to transport authorities and operators’ requirements with BYD’s battery technology. The 12.6m long vehicle has three axles, allowing it to qualify for reduced Road User Charges in New Zealand thanks to lower axle loads.

Joining the Auckland Transport fleet, the zero emission bus with a total passenger capacity of 78 will be evaluated on different services in New Zealand’s largest city in trials supported by energy supplier Mercury. Up to 36 passengers can be seated, and two wheelchair spaces are provided which are accessed via a manual ramp at the front door.

ADL’s electric buses in New Zealand have already completed more than one million zero emission kilometres in service. Like its two-axle siblings, the BYD ADL Enviro200EV XLB will be built locally by ADL’s partner Kiwi Bus Builders on BYD chassis, supporting New Zealand’s transition to a decarbonised bus fleet by 2035.

ADL’s General Manager in New Zealand, Tony Moore, said: “The launch of our extra-large electric bus marks an exciting new chapter in our partnership with Auckland Transport. After bringing the first electric buses to the city in 2018, we now have a zero emission bus that is fully designed to New Zealand requirements – and is made locally, boosting the economy and supporting skilled jobs.”

Auckland Transport Metro Decarbonisation Manager, Darek Koper, said the introduction of this new three-axle electric bus completes the procurement of the zero emissions trial bus fleet: “This trial fleet provides a range of options for New Zealand bus operators and it will build operator confidence in new technology. It will also allow them to understand operational requirements and costs to inform future procurement decisions, while supporting the accelerated transition to zero emission buses in Auckland. We are pleased to team up with Mercury and our initial operator, Ritchies, in joining the electric revolution.”

“If New Zealand is to take timely action to decarbonise its transport system, we cannot rely on the electrification of private vehicles alone. We must also shift our mindset towards reducing or avoiding travel, active modes such as walking and cycling, and of course public transport.

“This is a wonderful next step Auckland Transport is taking to decarbonise our public transport system, and we’re excited to see how the team continue to further their ambitions of a cleaner transport future.”