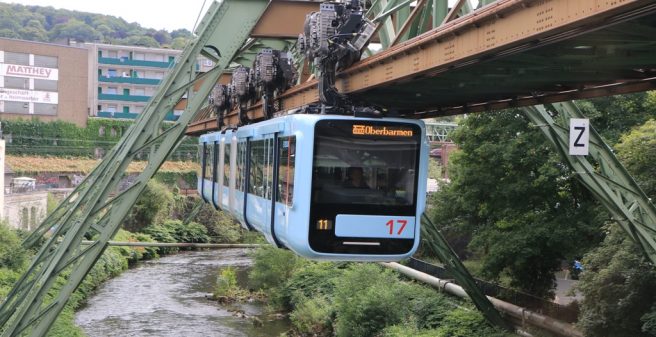 One of the new Vossloh Kiepe-built suspension vehicles of the Schwebebahn Wuppertal which reopened its' service on 1 August 2019 I Photo: UTM

The reopening of the world’s oldest and most famous suspension railway in Wuppertal was even mentioned in the news in Germany and internationally. On 1 August, Wuppertal’s world-famous “hanging train” was put back into service after a total of 256 days of standstill. After a power rail had crashed on 18 November 2018, the operation was halted in order to carry out investigations and repairs. Buses run as a substitute, but they were not as fast (and comfortable) as the “hanging monorail”. Commuters and train spotters greeted the reopening of the hanging train, or the Schwebebahn, with cheers and applause as it left its depot in Oberbarmen in the early morning hours of 1 August 2019.

Since 1 August 2019 the suspension railway is operating again. In the meantime, the old fleet has been entirely replaced by the new blue Vossloh Kiepe trains which have been delivered in the meantime. Deliveries started in 2016 and ended in 2019. The 3-car articulated trains of the new generation 15 / GTW 15 are 24 m long and 2.20 m wide. The GTW have a similar architecture as the GTW 72, but have been built by using a lightweight carbody, new propulsion equipment with 4 x 75 kW asynchronous motors and an improved driving comfort. Furthermore, Vossloh Kiepe was the main general contractor for the complete vehicle. The mechanical part was supplied by the Stadler Valencia plant in Spain. The interior and exterior design was designed by the Berlin-based design office büro + staubach. The contract for the delivery of the 31 new monorail lines was signed on 10 November 2011 with Vossloh Kiepe. The order volume amounts to 122 million euros, of which 20 million euros was taken over by the regional transport authority VRR (Verkehrsverbund Rhein-Ruhr).

The GTW 72 trains from 1972 – 1975 have now been entirely replaced by the GTW’s 15. Alstom Transport Germany installed a new signaling system based on ETCS (European Train Control System) in parallel to the commissioning of the GTW 15 fleet. For the moment, only the GTW 15 fleet and the historic Kaiserwagen are equipped with ETCS. Whether the remaining historical GTW 72 no. 15 will be equipped with ETCS in the future, is still to be decided.

What happened to the old GTW 72 cars?

Surprisingly, none of the GTW 72 cars have been scrapped straight away and there was a large interest from companies and private persons to re-use them as static objects or even offices. Of the original 28 MAN-built railcars from 1972 to 1975, 25 were still operational by 2015. Twenty-one vehicles were offered for sale by the WSW and three were handed over free of charge – provided that they remain on the territory of the city of Wuppertal. The WSW originally wanted to keep a car as a museum vehicle (Nr. 15), but the last GTW 72 was abandoned on July 11, 2019. The historical car nr. 15 is now stored “offline”.

On the reopening day, the first train left at 5:12 am in Vohwinkel and at 5:15 pm the regular passenger service from Oberbarmen was resumed. The resumption was accompanied by a variety of small actions, organised by WSW, along the line. Advertising teams were handing out little gifts, and at the Zoo / Stadium station, there was even a waffle stand and an ice cream van waiting for the passengers. The Wuppertal suspension railway is the oldest of its kind in the world. The nearly 120-year-old system is Wuppertal’s official landmark and carries 85,000 passengers per day on its 13.3 km long route. The unique system was put into operation on March 1, 1901.

A map and further pictures of Wuppertal’s suspension rail can be found here: