After 39 years: A new life for Berlin‘s Siemensbahn 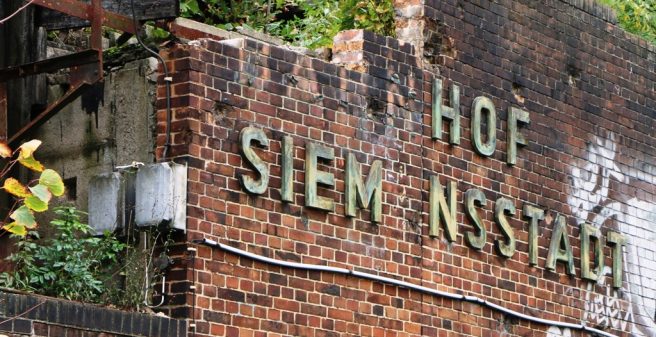 A totally new perspective for the „Siemensbahn” in Berlin: After 39 years out of service the capital city’s senat and Germany’s state railway operator Deutsche Bahn signed an agreement to finance the necessary planning and preparatory work for the reopening of this branch line. It includes a feasibility study about a potential extension beyond the former terminus at Gertenfeld.

A little bit of history

The so-called Siemensbahn used to be part of Berlin’s S-Bahn is a 4,5 km long route which branches off the Ring line routes (S 41 / S 42) at Jungfernheide and terminates at Gartenfeld, with to intermediate stops at Wernerwerk and Siemensstadt. It was built in 1929 mainly to serve the newly developped and restructured Siemens area east of Spandau – actually siemens paid a considerable part of the construction work. The S-Bahn strike in 1980 brought the end of regular operation also for this route, and it was never reopened. Track and other infrastructure are largely still in place today, although in totally neglected stage.

Siemens and the Berlin city government formerly announced on 31 October 2018 that the company will invest up to EUR 600 mn in the coming years, in order to completely redelop the area of Siemensstadt (“Siemens City”): 70 hectares will be transformed from and existing production facility into a modern, urban district for a diverse range of purposes, including some 50.000 to 60.000 sqm of new housing. The old, out of service Siemensbahn will be toally rebuilt into a fast, modern rail connection and integrated once again into the S-Bahn Berlin network.