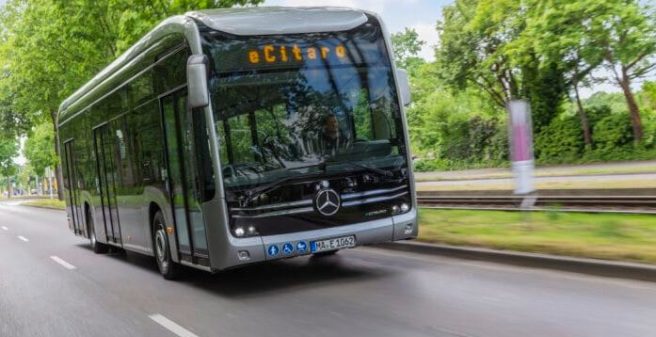 In 2022, SWEG will receive the first Series eCitaro with a Fuel Cell as range extender I

The transport operator SWEG with its headquarters in Lahr / Black Forest will launch the first Mercedes-Benz eCitaro REX (Range Extender) out of series production. SWEG and Daimler Buses signed a corresponding declaration of intent yesterday, 30 March 2020. Delivery will take place in the course of 2022. It is the second application for the eCitaro with a fuel cell range extender. Hamburger Hochbahn (HHA) and Daimler announced last year to test the first articulated eCitaro with a fuel cell range extender by the end of 2021.

This is the next development step of the fully electric, locally emission-free eCitaro. It was only launched in 2018. In the course of this year, its range will be increased considerably with new battery generations, including solid-state batteries – a pioneering achievement in automotive engineering.

With its declaration of intent, SWEG is already taking the next level. The eCitaro will be fitted with a fuel cell as a range extender. It generates electricity from hydrogen while driving. This increases the range again and the eCitaro can finally replace conventionally powered city buses seamlessly, even with very high range requirements.

The usage of fuel cells is not totally new to Mercedes Benz. Mercedes presented the first fuel cell bus, NEBUS (abbreviation for New Electric Bus) in 1997. In the years 2002 – 2006 the so-called Citaro Fuel Cell Buses were tested in nine and more cities worldwide, including Amsterdam, Barcelona, Hamburg, London, Luxembourg, Madrid, Porto, Stockholm and Stuttgart. Based on this, the Citaro FuelCELL hybrid with serial hybrid drive (fuel cell, wheel hub motors and batteries for temporary storage) was developed. Four vehicles were in operation in Hamburg until 2018. Hamburger Hochbahn AG (HHA) and Mercedes-Benz announced in September 2019 that the first two emission-free articulated buses with fuel cells as a range extender will start operation in Hamburg at the end of 2021.

From 2022, SWEG will start operating the two-door 12 m bus from the company’s headquarters in Lahr. The company is currently developing a concept for supplying the bus with hydrogen.

SWEG: more than 400 buses with a high focus on environmental protection and safety

SWEG (Südwestdeutsche Landesverkehr-AG) is a company with its headquarters in Lahr / Black Forest, operating buses in urban and interurban traffic as well as local rail freight and rail passenger transport in Baden-Württemberg and in some neighbouring areas. The company has a fleet of around 400 on its own and around 60 rented buses. SWEG employs more than 1,300 people.

The transport company relies on environmentally friendly buses. Over the past few years, SWEG has tested many alternative drive types – including natural gas buses. The transport company also uses electric and diesel-electric hybrid buses. SWEG also puts a high focus on maximum safety, as demonstrated by the fact that the Citaro last delivered with the Sideguard Assist turn assistant.

SWEG and Daimler have been working closely together for many years. The company’s bus fleet consists largely of vehicles from EvoBus GmbH. In recent years, EvoBus has supplied around 40 buses to SWEG every year. The solidarity already proved in the past the first big anniversary of the Mercedes-Benz Citaro: Exactly 20 years ago, Mercedes-Benz delivered the 1000th Citaro to the SWEG, which celebrated the 55,555 copies last year.