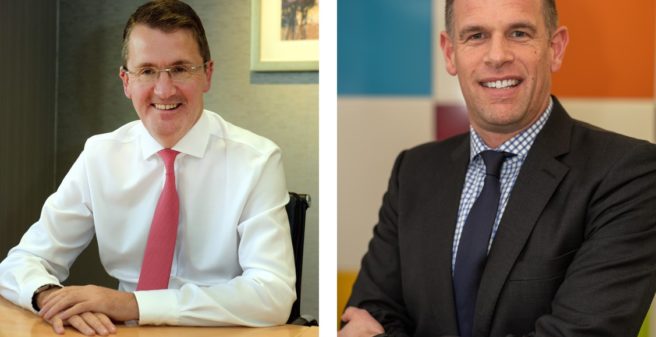 Colin Robertson, Chief Executive of ADL, joins the NFI Group Board whereas Paul Davies takes over the role of ADL President & Managing Director

Alexander Dennis Limited (“ADL”), a subsidiary of NFI Group Inc. (“NFI”), one of the world’s largest independent global bus manufacturers, today announced that effective from 30th September 2020, Chief Executive Colin Robertson, who, having spearheaded ADL’s success for 13 years, will be appointed to NFI’s Board of Directors to serve in the role as Vice Chair and will be succeeded by Paul Davies as ADL’s President & Managing Director.

As part of NFI’s acquisition of ADL in May 2019, Colin Robertson agreed to remain in his current role until May 2020, which has now been extended to 30th September 2020. This extension will allow for a period of transition to provide a seamless handover to Paul Davies and to ensure business continuity when Paul returns to his native Scotland in July 2020. Paul joined Alexander Dennis in 1997 and has over 25 years of automotive and rail industry experience. As Regional Managing Director based in Hong Kong, Paul led the company’s long-term profitable growth in the Asia Pacific region for the past 20 years.

Upon being appointed to the NFI Board in September in the new role as Vice Chair, Colin will assist Board Chair, the Honourable Brian Tobin O.C. P.C., and Paul Soubry, the President and Chief Executive Officer of NFI, in supporting NFI’s international growth. Colin draws on over 30 years of operational and senior leadership experience in manufacturing, including his 13 years as Chief Executive of ADL. During his tenure, Colin transformed ADL into the UK bus market leader and global leader for double deck buses through a relentless focus on the customer and combining operational excellence, innovative products and best-in-class aftermarket support. Under his leadership, which continued after NFI’s acquisition of ADL in May 2019, ADL has been consistently profitable with annual turnover increasing nearly fourfold to £631m. Colin is also the Chair of Entrepreneurial Scotland and has been awarded the honour of CBE (Commander of the Most Excellent Order of the British Empire) in 2019 for his services to exports and to the bus and coach manufacturing sector.

Colin stated, “Leading ADL has been exciting and extremely rewarding. I am fiercely proud of what has been achieved through the hard work of the entire team and the collaborative partnerships we’ve developed with our suppliers and customers. I know the company will be in fantastic hands. Paul has been a key member of the executive team and lives and breathes ADL’s mission and values. With his thorough understanding of our business and the wider industry, I have every confidence that Paul will bring further success to ADL.”

Paul commented, “I’ve been very fortunate to have worked for Colin for the past 13 years and I am deeply honoured to have been selected to take on the challenge of continuing the amazing journey that we’ve experienced under his leadership. I look forward to continue working with the NFI and ADL teams and our partners to provide world-class transport solutions that deliver for our customers.”

NFI Chair, The Honourable Brian Tobin, O.C. P.C. explained, “The NFI Board is thrilled that Colin Robertson has agreed to join our Board as Vice Chair, and I look forward to working with him in assisting and overseeing NFI Group’s pursuit of added competitiveness and further international growth.”

“I have known Colin for nearly a decade and constantly sought a way to bring our two companies together and in the process gained a tremendous amount of respect for his business expertise and strategic vision,” said Paul Soubry, the President and Chief Executive Officer of NFI. “Colin’s vast manufacturing background, experience and deep knowledge of the global bus and coach markets will continue to serve NFI well,” Soubry explained further, “I’m also very excited to work with Paul who has been mentored by Colin for several years as they grew ADL’s presence to be a market leader in the Asia Pacific Region. Paul is exactly the right kind of leader to drive the next chapter of ADL as part of NFI.”

Paul Davies’ role as ADL’s Managing Director for the Asia Pacific region will pass to Steve Rose, who joins Alexander Dennis from Cummins where he most recently had been Regional Operations Director, Taiwan & Mongolia, and General Manager, Hong Kong. Steve has over 40 years of experience in manufacturing, operations and aftermarket support.