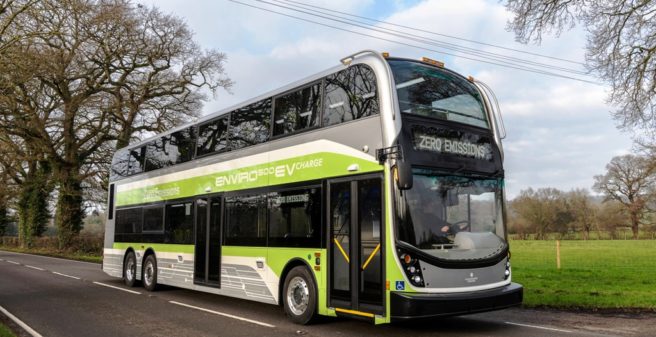 Alexander Dennis presented his new double-decker “Enviro 500 EV Charge”, the largest electric bus in the world, at an internet press conference on 10 June 2021.

Alexander Dennis is the world’s largest manufacturer of double-deckers and sells these types of buses to many countries around the world, especially those that were once part of the British Empire. Like Hong Kong, for example. Since 2020, Alexander Dennis has been part of the Canadian “New Flyer” group, together with Plaxton, another British coach builder.

ADL stepped into the Continental European market with its double deck models, including the sale of two double-deckers to the Swiss “Postauto”, and the first two “Alexander Dennis Enviro 500” to Berlin’s BVG (nos. 3550 and 3551). In the meantime, BVG has ordered 199 more of these vehicles which have a rather unusual feature: they are powered by Mercedes Benz engines.

In October 2015, ADL presented its first battery-powered electric double-decker. At the “Busworld” in Kortrijk, there was a vehicle in typical London red, whose electric drive was provided by BYD from China. This was the beginning of a close cooperation between Alexander Dennis and BYD in the field of battery buses.

About the new Enviro 500 EV Charge

Alexander Dennis’ new electric double-decker is a 13.7-metre-long three-axle vehicle, obviously a „close relative“ of the vehicles just recently delivered to Berlin. But unlike these , it has only two doors in the front and middle. The prototype is destined for the US market, where ADL has delivered more than 1,200 double-deckers since 2001. Alexander Dennis offers great flexibility: The e-buses it will be available in different heights of 3.90 metres (for the Japanese market), 4.00 metres (continental Europe, for example Swiss Post), 4.06 metres (“Berlin height”) and further more up to 4.40 metres.

The “Ax-Trax” drive from ZF provides the propulsion. Two wheel hub motors with an output of 125 kilowatts each are – rather unusually – installed in the third axle. This is an electric portal axle and of course also comes from ZF. And because the third axle is driven, it is not a “trailing axle”, but the unsteered second axle is a “leading axle”. The combination of an unsteered leading and third drive axle has a positive effect on the weight distribution in the vehicle. On the front axle, also from ZF, the Enviro 500 EV Charge features independent wheel suspension.

The prototype is a depot charger. It spends the day on its line and is recharged during the night at the depot. This is done via cable with a CCS combo plug. Alexander Dennis highlight that the bus has a range of at least 250 kilometres, even when the heating and / or air conditioning, which are also electrically operated, are running at full power. This is supported by an electric heat pump. Alexander Dennis is also considering offering the Enviro 500 EV Charge as an “opportunity charger”, which can be recharged during use on the line – for example via pantograph.

The batteries package of the Enviro 500 EV Charge is located underneath the floor of the bus which still allows for a low-floor design – the floor is just 4 % higher than in the diesel version. battery cells have a capacity of 648 kWh.

An option for Berlin?

It remains to be seen if and when the first “Alexander Dennis Enviro 500 EV Charge” will also operate in Berlin. What was the recent statement from the BVG? “Now development of the electric bus is gaining speed. We are currently running a large tender and we are very curious to see what the result will be. There are very interesting offers on the market, even from completely new manufacturers.“ We will observe what may happen.