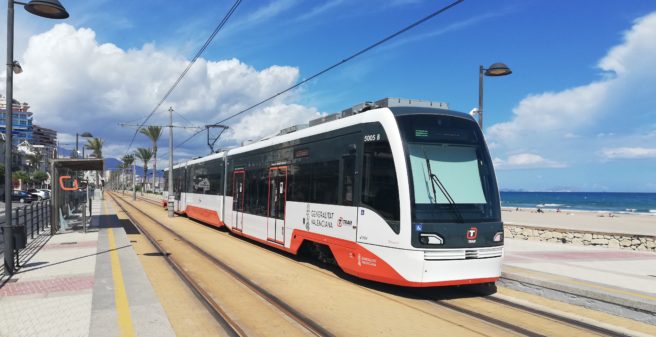 New trainset no. 5005 on route 3 directly on the Mediterranean coast! | © Harald Berger

In September 2017, Spanish public operator Ferrocarrils de la Generalitat Valenciana (FGV) had ordered these train sets for use on its network between Alicante, Benidorm and Denia along the mediterranean coast. The bi-directional light rail vehicles cover tramway applications and full train regional operations. They are are able to operate in electric mode on 750 V DC overhead voltage lines but also, on non-electrified lines, in diesel mode. The trains were supplied in 2018 and 2019, first trails started already in January 2019, but passengers had to wait until 31 July 2020 before the new tram-trains started operational service.

FGV had already ordered nine tram-trains for the Alicante network from the same factory (owned by Vossloh at that time) back in 2006/7. Six similar vehicles were delivered to Mallorca but have seen very little service on the island so far and are currently stored out of use.

Alicante’s meter-gauge network is a mixture of pure tramway operation with Vombardier Flexity low-floor tramways and the 93 km long route Alicante – El Campello – Benidorm – Altea – Calpe – Denia which is been electrified as far as Beniform and converted to tram-train operation, in Spanish language called „tren-tram“. It used to be a traditional narrow-gauge railway line, opened in 1914 and operated by DMUs since the early 1960s. Usually the nine 2007-built tram-train units serve the route to Benidorm while refurbished diesel units continue to operate the non-electrified section beyond Benidorm. This part of the route has been out of use to allow complete modernization of the infrastructure for several years, but the DMUs now operate again between Benidorm and Teulada leaving only the final stretch between Teulada and Denia still bus-operated until the works are completed.

The new Stadler tram trains currently operate on route 3 between Alicante Lucero and El Campello where the depot is located but service will soon be extened to route 1 to Benidorm. As the new units allow for bi-mode operation, they will run through-trains over the entire length of the route between Alicante and Denia once the infrastructure is completed – most llikely at the end of 2021. The last DMUs will be taken out of service then.

Some technical data of the new tram-trains:

Additional info and a map of the light rail Alicante: