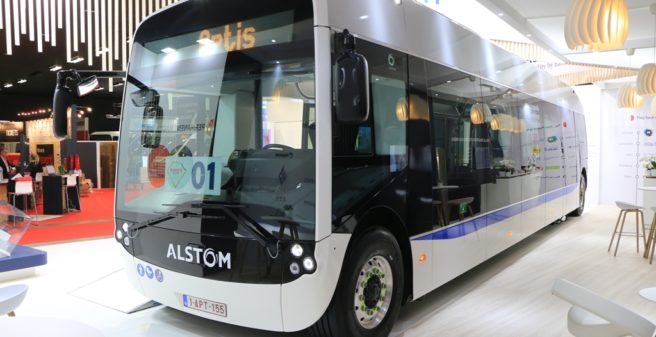 Since the end of the 1980s, city bus concepts appeared on the market that had low entrances but forced the use of steps, ramps and platforms, especially above the wheels, and whose entrances were often far from the edge of the bus stop. At that time, the basic accessibility requirements for low-floor trams were also established, which demanded even better accessibility and a completely step-free interior. Tram technology was not yet mature. This was particularly true for the first vehicle series ULF in Vienna and COBRA in Zurich.

As a developer and manufacturer of rail vehicles, Alstom dared to also develop a city bus in the form of a battery bus under the designation APTIS, which fulfils the aforementioned requirements for a barrier-free layout. It was first presented to the trade public at Busworld 2017 in Kortrijk, the Netherlands, and then at InnoTrans 2018 in Berlin. We described it here in “Urban Transport Magazine” on 13.05.2019. APTIS meets the two basic requirements of urban public transport, namely safe boarding with minimal gaps at all entrances and no steps or platforms inside the vehicle (except for the 4 seats above the rear axle). Ideal from a conceptual point of view, no laborious climbing to the seats over the wheels which protrude far into the passenger compartment, no associated loss of space and no restrictions on seat and door arrangement. Two pairs of steered wheels at both ends of the vehicle, which enable precise docking at the edge of the bus stop, characterise the vehicle. In between is the unrestrictedly usable, 10.4 m long and completely step-free low-floor area, which allows up to three wide doors and a good division of the interior with seat distribution selectable according to the customer’s wishes and easily accessible wheelchair spaces.

However, the order intake remained extremely unsatisfactory. Over four years, a total of 87 cars were sold: Paris 50, Strasbourg 12, Grenoble 7, Toulon 12 and La Rochelle 4, Aranjuez 1. And as was to be expected with a newly developed product, the 25 buses already delivered still have some minor problems to be fixed. Alstom APTIS, a company created in 2018 and wholly owned by the Alstom Group, faces a difficult market environment: A shift in the needs of customers in France and Europe in the electric bus market and fierce competition on the European market directly affect the company’s activity, which is only at work to autumn 2021. With the support of an expert firm and the Alsace Development Agency, Alstom is looking for a potential buyer, who would, however, be faced with a difficult task. Production still seems orders of magnitude away from any reasonable economies of scale, and it must be feared that it will take a long time to break even. A buyer would probably first have to make another major investment to cut costs. And a further investment in the development of an articulated bus version, which is indispensable for market success, or in a trolley bus, is out of the question at the moment. If this search is unsuccessful, 141 direct jobs would be lost at the Alsatian manufacturing plant in Hangenbieten.

Other reports about the APTIS in UTM: