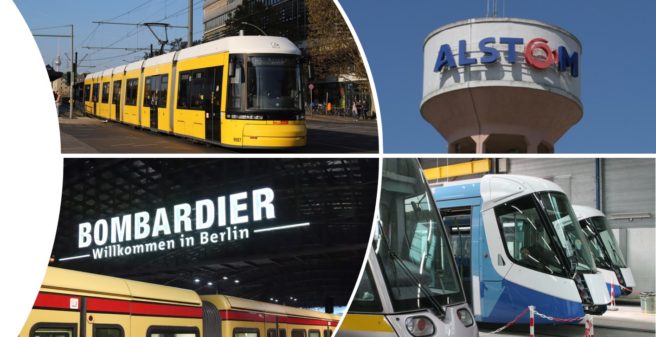 In the rail industry, the news spread like wildfire. For days, weeks and months, there have been rumours of a new consolidation in the rail industry. After the unsuccessful merger between Alstom and Siemens in 2019, Alstom seeked for a new alliance. Both the Aerospace and Transportation branch of the Canadian-European supplier Bombardier have suffered financial difficulties since years. In order to improve the cash situation, the regional aircraft programme C-Series has been partially sold to Airbus. The same happened to other parts of the Aircraft division.

According to Alstom, the acquisition will lead to a strong player in the railway and transportation market. Both companies will complement each other. After the transaction, Alstom expects to have an order backlog of around 75 billion Euros and revenues of around 15.5 billion Euros. By doing so, Alstom will be the second-largest railway vehicle and equipment manufacturer after the Chinese giant CRRC which has a revenue of ca. 30 billion Euros.

The price for the acquisition of 100% of Bombardier Transportation shares will be € 5.8bn to €6.2bn which will be paid via a mix of cash and new Alstom shares. CDPQ will reinvest ca. €2bn corresponding to 100% of cash proceeds to be received from the sale of its stake in Bombardier Transportation and further invest €0.7bn in Alstom, outlining its strong belief in the strategic rationale and value creation potential of the combination.

Bombardier itself emerged from a number of global rail vehicle manufacturers via many acquisitions between the 1970s and 2000s. The first acquisition was the Lohner Werke in Vienna (1970), followed by the Montreal Locomotive Works (MLW) in 1975, the US manufacturers Budd and Pullman-Standard and in the 1980s the BN Constructions Ferroviaires et Métalliques in Bruges, Belgium, as well as the ANF industry in Crespin, France. Further acquisitions followed: 1992 the then state-owned Mexican manufacturer Concarril, 1995 the Waggonfabrik Talbot KG in Aachen, 1998 the Deutsche Waggonbau AG (DWA) with the plants in Bautzen and Görlitz and the manufacturer Vevey from Switzerland. In 2001, Bombardier took over DaimlerChrysler Rail Systems/ Adtranz with its head office near Berlin Tegel Airport and the production and engineering sites Hennigsdorf (near Berlin), Mannheim, Kassel, Nuremberg, Dreis-Tiefenbach and Braunschweig. The Adtranz sites in Switzerland (Zurich, Turgi and Pratterln) as well as in Great Britain, Denmark (formerly Scandia A / S in Randers), Sweden, Norway, Portugal, Italy and Poland as well as the joint venture in China were also part of the deal.

From 2001, Bombardier restructured its activities for development and production capacities. In Germany in particular, antitrust law had to be taken into account. This led the Stadler Pankow GmbH’s joint venture, which was founded between Stadler and Adtranz in 2000 only, to go into the hands Stadler in 2001. As a result, Stadler was therefore in possession of the licenses for the production of the Regioshuttle regional diesel trains and the Variobahn low-floor tram.

Due to the recession in the rail industry, several plants in Europe were closed from 2004 on. A total of seven production sites in five countries were closed and 6,600 jobs cut worldwide. This also includes the closure of the Nuremberg site (formerly MAN), the Amadora production facility in Portugal and three plants in the UK and one in Kalmar, Sweden. In 2005, the plants in Ammendorf in Halle (Saale) and the Pratteln plant in Switzerland were also closed. Since 2006, the former building of the Royal Railway Directorate in Berlin at Schöneberger Ufer 1 has been Bombardier’s headquarters. After another restructuring in 2016 – 2017, the offices were moved to a smaller building near Potsdamer Platz.

Alstom and Bombardier are employing over 9,000 people in Germany only. Worldwide, the common workforce would be over 70,000 employees. In so far, worker’s councils are concerned about possible closures of production sites and offices. However, it is also likely after the merger, many sites will remain operating. Alstom and Bombardier operate in a very positive market environment with passenger traffic expected to grow between 3% to 5% annually over the 2015-2025 period and global rail OEM market expected to achieve a +3.0% CAGR between 2021-2023. The dynamic is driven by urbanisation trend and a strong push for decarbonation of mobility. In Europe, the European Commission has set very ambitious targets in terms of CO2 reduction and several countries have announced large investments in rail. Therefore, a large global and European railway manufacturer could even new possibilities in terms of product development, market potential and even standardization. In Germany, Bombardier is operating engineering and production sites in Bautzen, Görlitz, Hennigsdorf, Kassel, Mannheim and Siegen. Worker’s unions and worker’s council have already been alterting about possible site closures and the risk of potential reduction of the work force in case the deal will be become reality.

As for the planned Alstom-Siemens merger in 2017/ 18, the European Comission needs to approve the deal. In February 2019, the European Commission had prohibited Siemens’ proposed acquisition of Alstom under the EU Merger Regulation. The merger would have harmed competition in markets for railway signaling systems and very high-speed trains. Whether the Commission will come to a similar conclusion in the case of Alstom-Bombardier, is to be seen. However, Bombardier’s market share for high-speed trains and signaling equipment is not as strong as Alstom’s.

Alstom is a preeminent rail equipment player with an industry-record backlog of €40bn and €8.1bn of annual sales as of 31-Mar-2019. Over the period 2016-2019, Alstom delivered strong sales development with an average annual growth of 5.5% outperforming the market, and significantly improved profitability (up to 7.5% adjusted EBIT margin). Bombardier Transportation is a reference player in global rail transportation with a €32bn backlog and €7.4bn sales as of December 2019. With a track record of market leadership and a strong expertise, Bombardier Transportation offers a broad product portfolio across all market segments and has a well-balanced industrial footprint between best-cost and high-tech countries. Post-transaction, Alstom will benefit from significant additional technologies and added R&D resources to consolidate its innovation leadership in sustainable mobility. The group will also further develop its presence in Québec, Canada. After the transaction, Montréal will welcome the Headquarters of Alstom of the Americas, leading all Alstom operations and expansion in these geographies. In addition, drawing on Québec’s well-established strengths in innovation and sustainable mobility, Alstom will establish a centre of excellence for design and engineering, as well as high-tech R&D activities, which will notably be focused on developing sustainable mobility solutions.

A value-creating transaction for all stakeholders

Alstom is committed to recover Bombardier Transportation’s full operational and profitability potential with the objective of restoring project execution and margin towards standard level. This will be achieved thanks to clearly identified levers including:

In addition, tangible and executable synergies have been identified and Alstom plans to deliver €400m run rate cost synergies in year 4 to 5. As a result of greater efficiency and of a more robust operational profile, the transaction is expected to be double-digit EPS accretive from year 2 post closing for Alstom shareholders. Customers will also benefit from the extensive expertise and the broad portfolio of this larger entity.

Pursuant to the terms of the acquisition, CDPQ (currently holding 32.5% of Bombardier Transportation), will become the largest shareholder of Alstom with approximately 18% of capital. CDPQ is a highly regarded strategic investor with a long-term investment approach and has a significant and successful track record in the rail industry. It is fully supportive of the transaction and Alstom’s strategy. CDPQ will reinvest its proceeds for c.€2.0bn and realize an additional investment of €0.7bn in Alstom.

Bouygues will remain an important shareholder of Alstom with around 10% of capital[8]. It is fully supportive of the transaction and undertook to vote in favor of the transaction-related resolutions at the EGM.

For existing Alstom shareholders, the transaction is expected to deliver significant value and they will be offered the possibility to accompany Alstom in the financing of this strategic acquisition through a rights issue, subject to EGM approval.

Indicative timetable and next steps

The signing of the Memorandum of Understanding has been unanimously approved by each of Alstom’s and Bombardier Inc.’s board of directors and the envisaged transaction is fully supported by CDPQ. The Memorandum of Understanding organises the information and consultation process by Alstom and Bombardier of their respective Works Councils and contains exclusive commitments by both parties.

An extraordinary general meeting (EGM) voting on the reserved capital increases and the rights issue should take place no later than 31 October 2020. Bouygues undertook to vote in favour of the transaction-related resolutions at this EGM. Subject to the EGM, rights issue will take place between end of 2020 and the first half-year of 2021 and the reserved capital increases will take place at closing. The transaction will also be subject to clearance from relevant regulatory authorities and anti-trust authorities. Closing is expected in the first half of 2021.