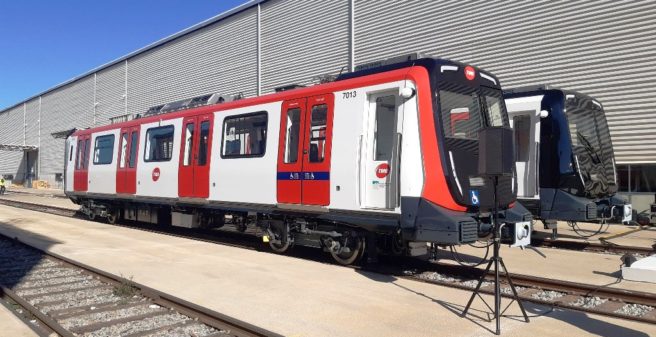 The first of the 50 new metro trains ordered for Barcelona’s metro lines 1 and 3 have just been presented at Alstom’s manufacturing plant in Santa Perpètua de Mogoda in Catalonia. The president Laia Bonet and CEO Gerardo Lertxund of Transportes Metropolitanos de Barcelona (TMB) held the official presentation of one unit of each of the new 7000 and 8000 series to representatives of the press.

24 train-sets of the 7000 series are foreseen for operation on line 3 in the European standard gauge and will replace the oldest train sets of the 3000 metro series. The order for the 8000 series, which is designed in Iberian broad gauge 1,668 mm and has a larger profile, originally was for 18 trains, but could be increased to 26 trains as additional funding became available0. These trains replace the 35-year-old 4000 series. We reported on the original order here:
https://www.urban-transport-magazine.com/en/tmb-barcelona-order-42-new-alstom-metros-trains/

Delivery of the 7000 series will start in May 2022, the 8000 series one month later. Two units will arrive each month – by the end of 2023 all new Alstom metro trains should be running on TMB’s tracks.

A mock-up of a standard gauge unit had previously been exhibited in Barcelona and Madrid at various locations.