Andalucia and its tramways – today 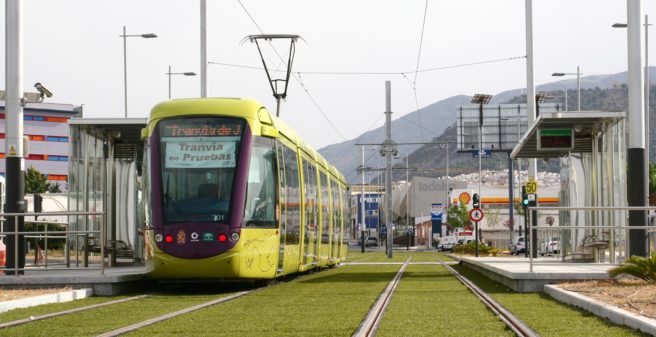 Starting in the mid-1990s, Spain saw a remarkable revival of the long-time abandoned transport mode tramway. No less than 14 new systems were completed between 1994 and 2011. However, the severe economic and financial crisis took its toll on the country, and consequently the progress to build new networks or to extend the existing ones slowed down considerably. Only two additional systems were inaugurated since then, in 2014 and 2017, after years of delay. Other systems have not even been opened to the public yet, although the economic recovery started some 4-5 years ago and has shown a steady growth ever since, especially compared to the situation in other Southern European countries. Anyway, public investments in infrastructure have only recently been resumed decisively but the pre-crisis levels are still pretty far off.

Andalucia as a tramway promotor

Spain’s Southern-most region Andalucia was proud to have started constructing new systems in six different metropolitan areas. However, what seemed to be an extraordinary success story, turned out to be simply too expensive for the regional and local authorities in terms of the necessary initial investments for the systems and their ongoing operating costs. Today, 13 years after the opening of “Andalucia’s first new tramway” in the small town of Vélez-Málaga in Octobre 2006, the situation is still far from being resolved.

Probably among the most remarkable and astonishing developments in the context of the world-wide trend towards the revival of modern medium-capacity transport systems, is the complete closure of this very first new system in the region, after just 5 ½ years in operation. Vélez-Málaga’s three modern low-floor tramcars are still in the depot without use and see little if any maintenance, although – and this is definitely another surprising part of this story – all three of them had been on loan to Sydney for a period of 1 ½ years! There have been several attempts to reopen the system including a 1.6 km stretch, which was completed but never used for public service. The efforts were intensified over the past 2 years, but a change in the regional government in Andalucia is one of the reasons why no final agreement could be reached on the financing of the tramway operations. A re-opening is therefore unlikely, at least for the next 12-18 months.

Another tramway, which is out of use although all the construction work was already completedmany years ago, can be found in the city of Jaen. A 4.7 km route could provide a good service to this relatively small, but densely populated town with some 130.000 inhabitants. Test riding started back in spring 2011, even including two weeks of free rides for the citizens of Jaen, but a change in the municipal government caused a complete abandonment of the tram for many years. Since 2017, a new mayor started several attempts to finally open the line with its five new Alstom Citadis trams, which were acquired new without use from Metro Ligero in Madrid in 2010. An agreement with the regional administration was signed last year, which partly assures the funding of the operating costs, which are considered to be too high for the municipality alone, but the progress to fix the damages on the infrastructure after almost 9 years without operation is quite slow and any final inauguration ceremony is unlikely to happen before 2021, if ever…

In Andalucia’s capital Seville, with around 1 million people living in the metropolitan area, a small city tramway opened in 2007. It was moderately extended over the years, but the progress to further prolong the line to the Santa Justa high speed train station is slow – and again subject to much political debate. Instead, long-term plans to expand Seville’s single-route “Metro” system are on the agenda again, although no financing is in sight that would cover the very high investments in the short-to-medium term. Metro Sevilla is a cross-town route with longer tunnel sections, entirely using its own right of way, but operated with low-floor tramways of CAF’s first ”Urbos” generation. It finally opened in 2009 after years of delays. In order to connect three suburban areas and neighbouring small towns with the metro network, three interurban tramway routes were planned and construction began on two of them. While the Dos Hermanos route only saw the construction of the track bed and very few external infrastructure, progress on the 12 km long route to Alcalá de Guadeira was more advanced before the lack of funds stopped any work in 2012. In this case, more than half of the rails had already been installed for years. Two years ago, it was decided to resume construction and to finalize the missing connection to the metro at Pablo de Olavide.Unfortunatley however, another political change in the leading party caused a new shift of priorities. Although a formal decision was reached to include the route in the metro network as well as to allow through-trains to Seville downtown, construction progress has again slowed down and any completion is unlikely to occur before 2022/23.

Light rail services started in another two Andalusian cities in 2014 and 2017, although in both cases after a series of delays: Málaga and Granada. Both use the same vehicles, CAF’s second generation low-floor “Urbos” tramcars. While the two lines in Málaga (total length: 12 km) mainly run underground, there is only a shorter tunnel section on the 15 km cross-town route in Granada. The construction progress on the (underground) prolongation of Málaga’s routes into the old town center is slow. It will undoubtedly increase traffic demand rather significantly. However, even with then approximately only 8 million passengers per year, it is quite a big if not an oversized system built to metro standards. Long lasting public discussions also prevented so far the construction of a branch to Hospital Civíl. It was supposed to run mainly on the surface but finally the decision has been taken to built this branch line entirely underground – in spite of the financial difficulties of the region Andalucia.

Without any doubt, the more successful system is the new “Metro Granada” – in practice a low-floor tram with an underground section. Overcrowding is already an issue, and plans for a second route, which should either run along or underneath the main pedestrian shopping zone of Granada are already well advanced.

Technically probably the most interesting project is Spain’s first real tram-train system between Cádiz via San Fernando to Chiclana, on the Atlantic coast. The level of technical complexity is high as half of the new line uses existing long-distance tracks of the Cádiz-Seville railway as far as to San Fernando where it branches off, crosses the old town center and continues on its own right of way to Chiclana. There is another stretch of shared single-tracks in the streets of Chiclana before the tram-train (“Tren-tram” in Spanish language) terminates at the new depot area east of the town. Seven vehicles especially designed to use both types of operations were supplied by CAF already 7 years ago. They comprise three modules and allow for access on high platforms at the railway installations, which include a tunnel section in the downtown of Cádiz as well as low floor entrance on the pure tramway section in San Fernando and Chiclana. The tram-train uses Iberian broad gauge of 1668 mm. Construction is almost complete but after years of budget-constraints, technical difficulties and miscoordination with the state railway operator RENFE/ADIF, inauguration is delayed by no less than eight years.

The EU administration is claiming back some EUR 99 million in subsidies provided under the precondition that the system would be up and running on time by 2017. Several waivers were granted but as the final deadline 31 March 2019 was missed again the administration of the EU-FEDER funds formally requested the repayment of the entire amount. The regional government in Seville is handling the issue which seems not easy to overcome. In the meantime, testing of the installations has started again in May 2019, and the official inauguration sometime next year (or even earlier) seems not totally unlikely anymore.

With seven new independently operating systems in six different metropolitan areas built over the past 15 years, but just four of them operating on a total of 5 lines and 48 km, the benefits of the overall investments that easily exceed EUR 2 billion is remarkably low. Let’s hope for significant improvements in the near future – in the best interest of Spanish tax payers and the local population.