Another 50 new articulated trolleybuses for ATM in Milan 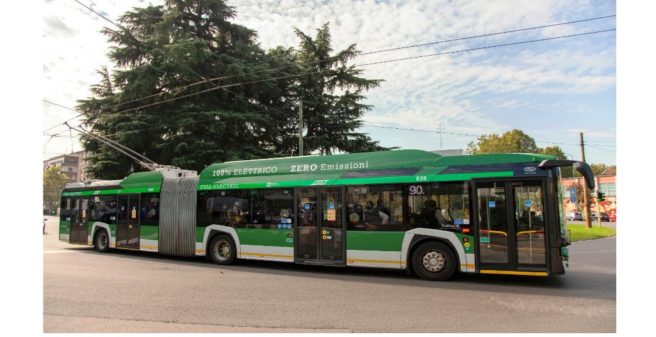 An order for the delivery of a further 50 Solaris Trollino 18 articulated trolleybuses for Italy’s largest trolleybus operator in Milan was signed in mid-November 2021. It is worth almost 40 million EUR.

ATM Milano’s order for 50 Trollino 18s is an extension of a 2018 contract under which Solaris has already delivered 30 trolleybuses. Milan will receive vehicles with electrical equipment from Kiepe Electric with traction motors of 160 kW each and batteries with a capacity of 45 kWh. The traction batteries can be charged during the journey when the vehicle is connected to the overhead line. The Trollino will be able to travel up to 15 km off the existing overhead network. The vehicles can accommodate up to 135 passengers, 31 of whom will be seated. An efficient air-conditioning system will ensure passenger comfort.

The Trollino for Milan will also be equipped with a video surveillance system. It consists of 10 cameras, including a reversing camera, a 10″ screen on the centre console and a data logger. To increase safety standards, constant monitoring of the insulation between the high-voltage components and the chassis is ensured. If a fault is detected, the pantographs are automatically retracted. A passenger counting system will also be installed in the vehicles. The first Trollinos from the new order are scheduled to arrive in Italy at the end of 2022. Solaris has already delivered 165 Urbino electric buses to ATM in recent years.

All remaining articulated buses from the 1990s will be replaced by the new Solaris, as will the last two-axle Iveco/Socimi 8820 buses, which are still in service on line 93 in mixed traffic with diesel buses and have already been in service for 37-38 years! Also no longer in use are the 10 Irisbus Cristalis ETB 18 series 400 articulated trolleybuses, which were only delivered in 2005 but are very prone to breakdowns.

We last reported on the Milan trolleybuses here:
https://www.urban-transport-magazine.com/en/new-trolleybuses-and-new-ebuses-for-milan/