Another metro extension in Barcelona 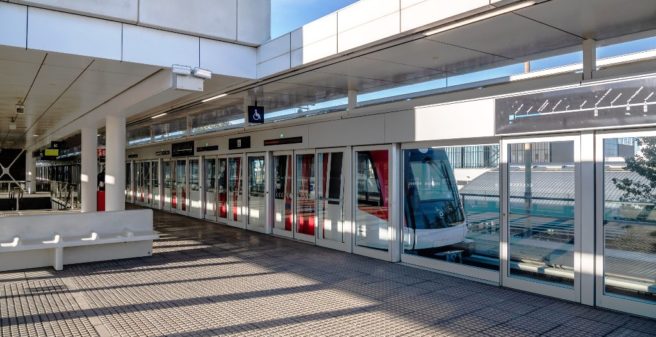 On 7 November 2021, the final section of the L10 Sud metro line started revenue service. The extension had been planned quite some time and the track had already been completed for years as a depot access. Starting at the previous terminus Zona Franca, which has been in operation since 1 February 2020, the driverless and automatically operated L10 trains now continue to the new terminus ZAL/Riu Vell serving three new stops along its 2.4 km of additional route. The extension was entirely built on an elevated alignment in this industrial part of the city. Therefore, the three new stations Port Comercial/La Factoria, Ecoparc and ZAL/Riu Vel all have platform doors. Total investment of the extension amounts EUR 120 million.

With this extension, the jointly operated lines L9 and L10 Sud as well as L9 and L10 Nord are 37.5 km long all together and include 35 stations. The construction of the 9 km long underground connection of the northern and southern sections of the L9/L10 with 11 new stops and various interchange points had been delayed due to lack of funds (EUR 950 million as per latest estimation) for many years, and is expected to be completed in stages before 2030.

A route map of Barcelona’s metro network can be found here:

We last reported on the extension of the Barcelona Metro here: