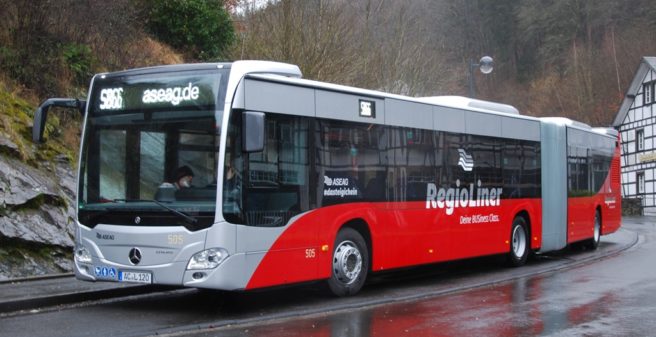 On 6 February 2022, the Aachener Straßenbahn- und Energieversorgungs-AG (ASEAG) launched the significantly improved SB 66 express bus line. It operates between Aachen city centre via the districts of Brand and Walheim, Roetgen, about 3 kilometres across Belgian territory and via Konzen and Imgenbroich to the centre of Monschau.

The “SB 66” starts its service Monday to Friday at about 5.15 a.m. (first car from Aachen-Rothe Erde station) and runs every 30 minutes until about 9.30 p.m.. The round trip (Aachen – Monschau – Aachen) takes three hours with turnaround times at the terminus stations, so line SB 66 needs six vehicles for the half hourly service. After 9.30 pm, line SB 66 only runs every hour.

On Saturdays, Sundays and public holidays, line SB 66 starts its activities around 7.00 a.m. and then runs at 60-minute intervals throughout the day until midnight. So even now there is a need for three buses to serve the line.

At Aachen-Rothe Erde railway station, the SB 66 offers connections to regional and suburban train services. Car-sharing services are also available here. In Roetgen and at the bus station in Monschau’s Imgenbroich district, a connection to ASEAG’s “NetLiner” call-bus system is possible, provided the passenger has ordered in advance (UTM reported).

ASEAG has procured six Mercedes-Benz Citaro articulated buses for use on the new express bus route. They have been christened “RegioiLiner”. The cars offer air conditioning, WLAN and USB connection. North Rhine-Westphalia’s Transport Minister Ina Brandes characterised them as “modern intercity buses”. However, she said, they are also necessary to encourage people in areas that cannot be reached by rail to switch to public transport.