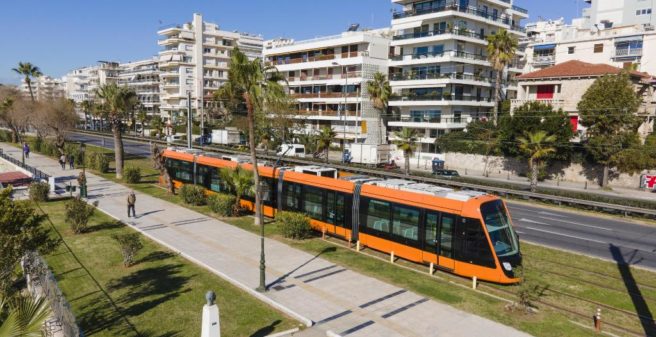 Right on time for the Olympic Games in 2004 Athens started the regular service on its brand new three-line tramway network. As so many other cities around the world the Greek capital had completely abandonded its old network by 1960, and reintroduced it with modern low-floor tramways several decades later.

The new tram struggled to get fully accepted by the locals, mainly becuase it was considered to be too slow and with only a few interconnections with other rail transport. Nevertheless the tram is now a well established part of the local public transport network.

To address some of the critisism an extension into the inner area of nearby harbour city Piraeus was proposed. After much delay, mainly due to the still unstable financial situation of the public administration, construction finally begun in 2015. Test runs started in early 2019. The 5 km route starts at the Stadium/S.E.F. terminus and uses a large loop through parallel streets in Piraeus where it terminates in a short branch to the old harbour area at Akti Poseidonos. It connects to metro line 1 and in the future also with metro line 3 which will shortly be extended from current terminus Aghia Marina to Dimotiko Theatro.

While 35 Breda “Sirio” trams provide the service until today, for the extension 25 new low-floor trams have been supplied Alstom. These „Citadis X05“ tramcars are composed of five modules and have six doors on each side for the up to 294 passengers on board. The external livery has been decided after a public voting among the local population.

The Breda vehicles are in the need of a mid-term refurbishment, their appearance is already not in best shape.

With much delay the extension was finally inaugurated on 15 December 2021 – without the terminus Akti Poseidonos. Instead of three lines in service since 2004, there are now only two: Line 6 runs from Syntagma to Pikrodafni on the coast where it connects with line 7 which runs all the way along the coast from Piraeus to Asklipio Voulas. The new network map is available at: http://www.urbanrail.net/eu/gr/athens/tram/athens-tram.htm .

The new Alstom Citadis X05:
(click to to open the gallery)