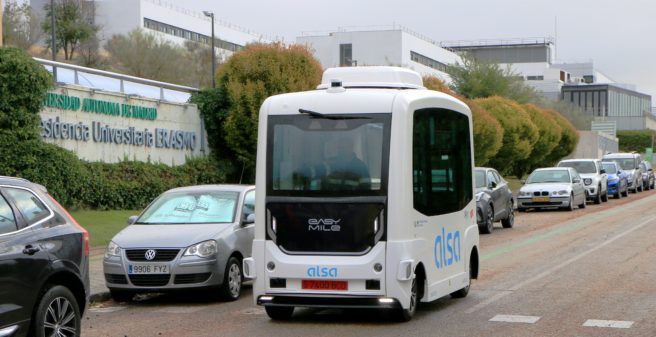 Elsewhere they are around for quite some time already, but now they can also be found in public transport in Spain – the autonomously driving electric minibuses. Its first location in the country could hardly have been more suitable: On the extensive grounds of the autonomous university – Universidad Autónoma (UAM) – in Alcobendas in the Greater Madrid area. Since 20 October 2020, the autonomous bus is operating on a 3.7 km circuit with a total of eight fixed stops, starting from the Cantoblanco suburban railway station and with connections to various passing interurban bus lines.

Here, the Easy Mile EZ10 travels using public streets together with normal road traffic. After months of testing, the minibus is now available to the general public as a new public transport service running hourly on the circuit from Monday to Friday from 7.15 to 15.15. The route is marked with a green line on the asphalt, but this is not part of a sophisticated optical guidance system for the bus, but rather serves as a reminder to other road traffic to pay attention to the new vehicles. The EZ 10 drives here at a speed of up to 15 km/h, even though it is technically capable of driving faster. Due to the comparatively low, general traffic density on the university grounds, it hardly represents any obstacle. There is an “instructor” on board, who can intervene if necessary in case of disturbances – but in practice this is not very often the case. A maximum of 12 passengers are allowed on board.

The Spanish transport authority Dirección General de Tráfico (DGT), the University UAM and the regional transport association Consorcio Regional de Transporte de Madrid (CRTM) are the joint initiators of this project, while the operation of the bus is monitored and carried out by the nationwide bus operator ALSA. The new project received much attention in the press during its first week, but it remains to be seen if the new service will be accepted by passengers in the long run.