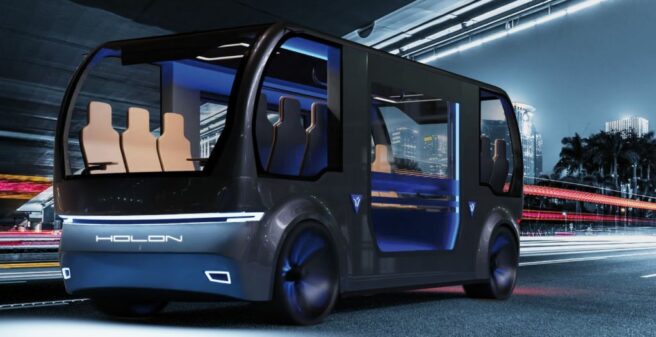 From October 2019 to October 2021, Hamburger Hochbahn AG (HHA), Germany’s second-largest public transport company with 298 underground cars and 1,107 buses, gained initial experience with an autonomous shuttle. The minibus had been baptised HEAT (for “Hamburg Electric Autonomous Transportation”) and served a circular route in Hafencity without a driver, initially a smaller one that was later extended. The results of the trial were visibly encouraging.

For now the Hochbahn announces that, together with the Paderborn-based company HOLON, it intends to bring an autonomously driving shuttle onto Hamburg’s streets from 2024.

HOLON is a subsidiary of the Paderborn-based automotive supplier Benteler and has been legally independent since the end of 2021. Initially it operated under the name “Benteler EV Systems GmbH”, but has recently been operating under the new name HOLON. This comes from the Greek and means “a whole that is part of another whole”. (So the whole “HOLON” within the other whole “Benteler”).

HOLON is engaged in developing autonomous driving shuttles. The company describes its goals with the statement “with us, the future will be autonomous, electric, sustainable, inclusive and reliable.” The manufacturer plans to present its very first corresponding vehicle in less than two months, namely at the beginning of January 2023, at the CES (Consumer Electronics Show) in Las Vegas, USA.

From 2024 onwards, a HOLON will be on Hamburg’s roads. The use of this car is intended to promote the expansion of customer-friendly and climate-friendly mobility systems (in Germany). To achieve this goal, HHA and HOLON signed a memorandum of understanding to further develop autonomous shuttles for use in public transport.

The shuttle is to participate in normal road traffic under real conditions in a pilot area in Hamburg. The experience gained with it will be used to find and test innovative solutions for autonomous on-demand systems in local public transport. At the same time, they want to find out how such an autonomous shuttle is perceived in public road traffic and how it is accepted by its passengers and other road users.

Henrik Falk, CEO of Hochbahn, says: “Autonomous on-demand services will help shape the mobility of the future and play an important role in the “Hamburg-Takt”.” Hamburg-Takt means that by 2030 every Hamburg resident will be able to reach a public mobility service within five minutes from morning to evening. According to Hochbahn, this will not be possible without autonomous shuttles.

Falk continues: “With the cooperation with HOLON, we want to take a decisive step towards the use of such vehicles in public transport. In HOLON we have a very strong partner for this.”