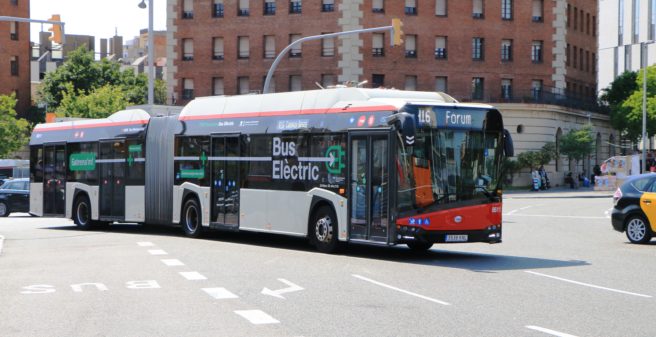 Transports Metropolitans de Barcelona (TMB) has ordered 14 more full-electric articulated buses from Solaris Bus and Coach. The first two Solaris battery buses came to Barcelona in 2016, followed by another three of the current type Urbino IV. All of them are used on the trunk cross-town route H16 which allows for opportunity charging on either end of the line.

The buses will be equipped with Solaris High Power batteries with a nominal capacity of 145 kWh. They charge overnight via plug-in at the depot and at the termini of the route via a roof-mounted pantograph at 500 kW enabling fast charging. The buses have nominal 240 kW central traction motor. The vehicles will have an powerful air conditioning system, the “MirrorEye” camera system that replaces conventional side mirrors with cameras. It ensures improved visibility not only in bright sunlight, but also when it rains or at night. All ordered vehicles will also be equipped with the Mobileye Shield+ device minimising the risk of colliding with pedestrians or cyclists. The system of intelligent cameras monitors the close surroundings of the vehicle and the driver is alerted to potential dangers with sound and visual signals. At the special request of the client, the Mobileye Shield+ will be additionally fitted with the Geotab system recognising, archiving information about and informing the operator TMB about potholes.