Barcelona: Reconstruction of the Tibidabo tram on hold 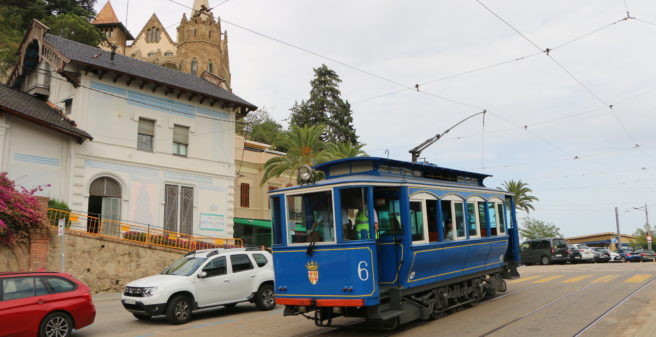 Only two tourist lines survived the major decline and wide-scale tram abandonment programme in Spain until the mid-1970s. One is the small tramway in Sóller on the island of Mallorca, and the other survivor is the short tram to the Tibidabo hill in Barcelona, locally also called “Tramvia Blau” in Catalan language. Its fleet roster consists of various original tramcars built in 1901 and 1904, and additionally a converted summer car of the former municipal tramway Barcelona (no. 129). Following an accident a few years ago, however, only three of the tramcars built in 1904 are now allowed to leave the depot and to operate beyond the depot access street: These vehicles had been re-equipped with modern, electronic control technology in 2012, hence their historical appearance is only external. These are numbered 5, 6 and 7. The remaining vehicles can only operate on the short depot access road and can not be used in public service anymore.

Two years ago, on 28 January 2018, the 1.3 km long line was shut down for recosntruction works. The line connects the terminus of the underground line L7 at Avinguda Tibidabo with the lower terminus of the funicular to the Tibidabo hill – operation started in 1901. The short, but steep line is to be extensively refurbished and the track layout to be modified – all this at a total cost of EUR 11 million – while the road itself will also be completely rebuilt and renewed.

However, the construction work has not really started during the past two years, only some preliminiary work has been carried out. Various lobby groups and neighbours are complaining about the situation and require resumption of the works, in order to restart operating the little tramway again, but little has happened yet. The originally envisaged two years of reconstruction work is already over, and no reopening date is in sight today. Only recently, Barcelona city administration announced the start of the tendering process shortly – let’s see when this turns into reality.

The Tibidabo tram today is a mere tourist attraction, as it runs only on weekends – with daily operation only during school holiday periods. The high fare makes the ride only interesting for tourists – locals and residents use the parallel city bus at the standard fare in Barcelona..

Hey! The name of the tram is “Tramvia blau” and not “tranvía”, “tramvia” stands for “tram” in Catalan while “blau” means “blue”. Also, the line going up to Avinguda Tibidabo is L7, not L6!

The best way to get to the the top of Tibidabo is to take the underground to Valvedra, then the modern funiclar, then the minibus that runs around the hilltops, all for standard fare. At the top there is an ornate double-decker church, a bizarre fairground and excellect views over Barcelona.