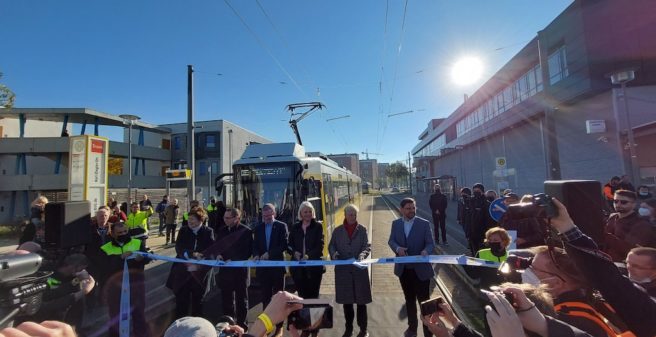 The opening ribbon was cut by Dr. Rolf Erfurt, Chief Operating Officer of BVG, Regine Günther, Senator for Environment, Transport and Climate Protection and Eva Kreienkamp, Chairwoman of the BVG Executive Board I © UTM

Berlin’s tram network has grown by 2.7 kilometres. On Saturday, 30 October 2021, the state of Berlin and transport operator BVG jointly opened the new tram line between Karl-Ziegler-Straße and Schöneweide S-Bahn station. After an opening ceremony with invited guests from BVG, the Berlin Senate, VBB and the construction companies involved, the maiden voyage with four GT6N low-floor trams began at shortly after 11 am.

From the early afternoon onwards, all passengers were able to use the new section of the line with the M17 and 63 lines. Several historic Tatra railcars were used, which ran a circular route between Schöneweide, Adlershof and the Köpenick tram depot.

It took just 17 months to build the 2.7 km long line that connects the previous Karl-Ziegler-Straße terminal loop in Adlershof with the Schöneweide S-Bahn station. After the ground-breaking ceremony on 18 May 2020, things went from strength to strength. We reported here:

The first tracks were already in place in autumn 2020. The first test and acceptance runs began in summer 2021. The short construction time was favoured by the fact that hardly any new supply lines had to be laid. In the course of the Groß-Berliner Dam, the track has already been kept clear on a green strip for years.

The new Adlershof II line, as it is called by experts, runs through an area that is partly undeveloped and partly already built-up with commercial and residential buildings. The neighbourhood, called Oktogon, is partly located on the old Johannistal airfield, where Berlin’s first motorised airfield was opened in 1909. Flying use ended in the 1950s. The naming of the stops after the aviation pioneers Benno König and Gerhard Sedlmayer as well as Landfliegerstraße commemorates Berlin’s aviation history here.

Around 12,000 passengers are expected daily on the new section. To create the necessary capacity, BVG is reinforcing the M17 line with four additional vehicles. Two more trains will be added for line 61. In total, around 464,000 additional kilometres of commercial trains will be operated annually on the new line. In the Groß-Berliner Dam area, the seating capacity will increase 7-fold.

The new line extends the M17 line from Schöneweide S-Bahn station via Groß-Berliner Damm to Adlershof S-Bahn station. Line 61 is extended in the opposite direction from its previous terminus in Karl-Ziegler-Straße to Sterndamm at Schöneweide S-Bahn station, while line 63 already ends at Johannisthal Landscape Park. Here, a reversing track was installed between the two directional tracks, which can be used from both directions. In future, there will be nine journeys per hour and direction on the new section.

Five new barrier-free pairs of stops with guidance systems for the blind, DAISY displays and weather protection have been built at an average distance of 450 metres along the route. A total of 5700 metres of track were laid for the new line. A newly built rectifier station with converters from Siemens and a transformer from the company SGB provides the necessary energy and sends the converted current through 15,200 metres of traction current cables and 7400 metres of catenary wire attached to 86 new masts. The overhead line was supplied by the Swiss overhead line specialist company Furrer+Frey, which happens to be located on the new line at Groß-Berliner Damm with a production and maintenance site.

The costs for the construction of the new line amount to a total of about 40 million euros. On the opening day, it was explicitly pointed out that the cost framework was adhered to.

Environmental protection in the first place

The project “New tramway line Adlershof II” (project duration: 11/2015 to 06/2022) is funded by the Berlin Programme for Sustainable Development (BENE) with funds from the European Regional Development Fund and the State of Berlin (funding code 1065-B4-T).

The new line is also subject to numerous environmental and noise protection requirements. The planning approval decision issued in February 2020 included a number of construction requirements, most of which serve to protect the environment. As the route runs through a water protection and residential area, particular emphasis was placed on the issues of water and noise protection. The grass track is equipped with STRAILastic encapsulation. The entire track is encapsulated, which significantly reduces primary airborne noise. The entire track also lies on a sub-ballast mat to absorb noise and vibrations. Rail head conditioning systems were installed in the few arches – a first for Berlin. The inside of the rail head is smeared with a synthetic oil to counteract rail squeal. As this was the first time the system was used on the new Adlershof II line in Berlin, it first had to be approved by the technical supervisory authority. On the opening day, 30 October, the system was not yet in use, as BVG first wants to determine the rail roughness after two weeks of operation and then calibrate the system.

In addition, new specifications for the drainage of rainwater apply to the new section. On the one hand, when it rains, not all of the water is to be channelled into the sewage treatment plants, but is also to be used where it falls – for plants, for example. In addition, the aim is to prevent flooding in the event of heavy rainfall, which is becoming more frequent due to climate change. In this context, a 500 m³ rainwater retention basin is planned under the new tram and bus terminus in Schöneweide.

Overall, it can be said that the new line was very well integrated into the area in terms of traffic and urban development aspects. In addition to the almost continuous grass track, the line was landscaped with trees, among other things.

It can be assumed that most of the area around the Adlershof and Johannesthal sites will be built on in the coming years. Today, the area still contains some industrial wasteland, green spaces, but also already modern residential and office buildings. But it will also remain green: The area around the station “Johannesthal Landscape Park” is already a landscape conservation area today and will thus continue to be available for recreation for residents and people working here.

The next construction measures

While Adlershof is now well connected with the tram line, BVG is preparing for the next new major projects. In August 2022, the groundbreaking ceremony for the new tram line from Hauptbahnhof to Turmstraße was celebrated. We reported here:

The opening is planned for the first half of 2022. At the northern end of the now opened new line in Adlershof II, the next construction site is scheduled for the coming year. In the first half of 2022, probably as early as March 2022, the reconstruction of the Schöneweide terminus will begin. While the S-Bahn station has already been under renovation since 2020, the entire tram and bus turnaround area is to be redesigned. In particular, the tram loop will be made accessible from both directions and the rainwater retention basin will be built (see above).

A tram festival in Köpenick

Parallel to the inauguration of the new tram line, a festival was held at the historic Köpenick tram depot on 30 October. In addition to Tatra special rides, which took visitors along the new line to Adlershof, the heritage preservation association Nahverkehr Berlin e.V. offered rides on historic vehicles through Köpenick’s old town. In addition, the 1:1 mock-up of the new Flexity tram for Berlin could be viewed by appointment. This had been on display at the Weißensee depot since August and was transferred to Köpenick only a few weeks ago. It is used for technical design coordination between BVG and manufacturer Alstom (formerly Bombardier). In addition to the new vehicle front, numerous new features catch the eye compared to the existing Flexity fleet:

Delivery of the first nine-car Flexity is expected in the second quarter of 2023. After that, all up to 177 further vehicles will be delivered. We reported here: