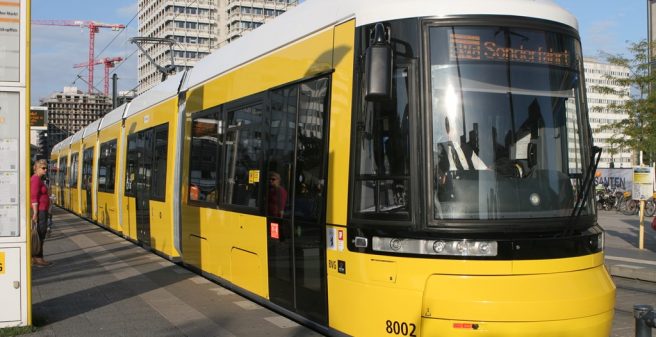 Under the terms of the current coalition agreement, the 3 km tram extension is part of the tram expansion program, which also includes other routes.

The line makes new direct connections between the northeastern neighborhoods, the central Alexanderplatz in the eastern city centre and the southeastern city and would relieve the overloaded metro line U2. The new tram route is also a prerequisite for the continuation of the tram to Steglitz in the southwest of Berlin.

The tram would run on much of the route on the multi-lane Leipziger Straße today. On a section adjacent to the Potsdamer Platz tram tracks were laid already in the 2000’s as a preparative work.

According to the now presented plans, the tram shall go into service from 2027 on at the earliest. This caused disappointment for many of the citizens. The project has been planned since the 1990s already and the initial idea was to have a tram up and running since the year 2006.

Berlin’s tram network has a network length of 193.6 km. After the closure of the last tram line in West Berlin in 1967, the tram only survived in the eastern part of the city. Since the reunification, only three extensions into the former Western part were established. The long-term plan is to reinstate tram service on several trunk routes in the former “West Berlin”.

For citizens of Berlin there is the possibility to comment on the planning on the internet and to give suggestions on the platform mein.berlin.de. In the course of planning further public events are planned.