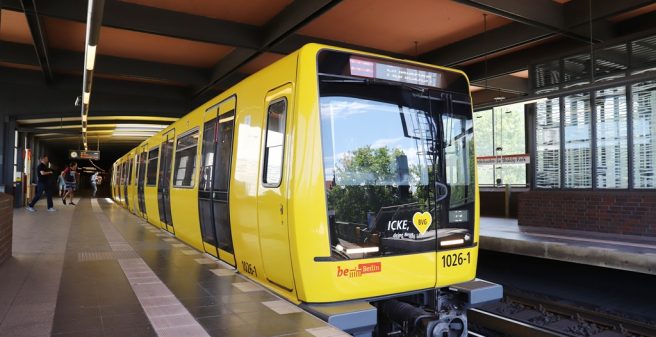 Stadler has been selected as a preferred supplier in the procurement of up to 1,500 new metro cars for Berlin's U-Bahn - due to juridic appeal the process has now been delayed I Foto: UTM

In 2017 Berlin’s public transport operator BVG launched a tender for the procurement of metro cars for its 151.7 km metro network, the U-Bahn. After having selected Stadler Pankow as the preferred bidder in May 2019, there is a risk that the procurement process will be on hold for a further two years.

The reason for this is a legal dispute between BVG and manufacturer Alstom. Alstom appealed to the procurement board which refused the appeal in July. Alstom is now appealing against this decision before Berlin’s Superior Court of Justice.

With the 3 billion EUR procurement, BVG plans to replace the entire old fleet from 1960’s and 1970’s. As Berlin’s metro system has two tunnel profiles, the so-called “small-profile” with lines U1 – U4 (maximum 2.4 m vehicle width), and the “large-profile” with lines U5 – U9 (maximum 2.65 m vehicle width), the tender includes both variants. In order to ease maintainability and in order to reduce the spare parts stock, BVG requires both the small and large profile variants as close as possible to each other from a technical viewpoint.

During the tendering process, BVG increased the tender volume from 1,050 to 1,500 cars and made changes to the delivery schedule. Furthermore, contractual conditions were adapted in such a way, that manufacturers had to guarantee the reliability of the trains for up to 30 years despite the fact the maintenance is undertaken by BVG. This is quite unusual in the rail industry. The original plan foresaw the delivery of the first 24 vehicles from mid-2021, with deliveries of up to 76 cars in 2022 and 138 per year from 2023 onwards.

The press, politicians and passenger interest groups are complaining about the further delay of the fleet renewal as service disruptions and availability of the metro system are deteriorating. Since several years already, BVG is running short of vehicles and the fleet is aging rapidly with an average age of 28 years. The oldest vehicles are series A3 60, operated on the small-profile network, are dating from 1960 and have been in operation since 59 years (!) with some modernisation in the beginning of the 2000’s. Due to cracks in the aluminium carbody structure of some 1970’s built trains, several vehicles had to be scrapped already. As a result, the main cause of many current problems is the lack of ready-to-use vehicles. While it was common until a few years ago to have trains on “stand-by” which are ready to replace defect trains on all lines, due to the above mentioned reasons all trains are needed for the current operation so that the number of stand-by trains has decreased significantly. On some lines, the length of train sets has been reduced from 8- to 6-car units – sometimes services even have to be cancelled.

Although the fleet size has now increased to 1322 due to the delivery of new IK Stadler-built trains, the problem remains on the large-profile fleet as the IK’s are only operated on the small-profile lines. In order to compensate vehicle shortage on the large-profile line U5, 11 four-car trains of the IK17 have been transferred to line U5 instead of the small-profile line U2. The width of the vehicles is compensated by a 17.5 cm wide gap bridging device between the platform and the vehicle – so-called “flower boards”.

According to local press and media, Alstom and a Bombardier/ Siemens consortium took also part in the tender. Bombardier and Siemens delivered the last metro fleet, 24 x 4-car small-profile H and 46 x 6-car large-profile Hk Series, between 1995 and 2007.

However, Stadler Pankow has the advantage over its competitors as it already produces the current IK series, ordered in 2012. After having delivered two pre-series train (IK15) in 2015, 11 series trains (IK17) were delivered for the large-profile line U5 with adaptations in 2017. A Further 27 IK18 trains are currently being delivered for service on the small-profile line U2 and another 14 so-called IK19 trains have been order via direct order in 2017 which caused a legal claim from Siemens which delayed the delivery of the 14 trains for almost a year. In total, Stadler will have delivered 54 four-car IK trains with a total of 216 cars to BVG.