Berlin: The end of the electric buses with inductive charging 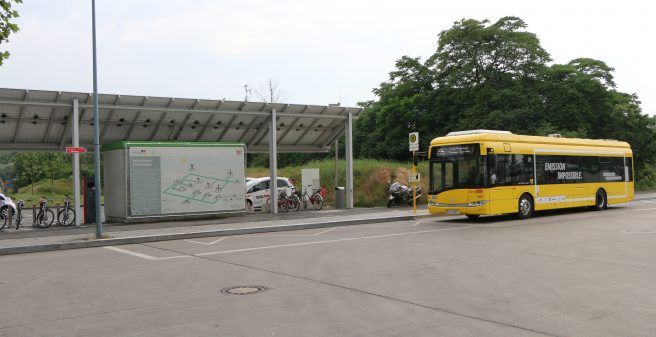 The Electric bus operations on Berlin’s route 204 (Zoo – Südkreuz) were discontinued after a testing period of four years. The four Solaris Urbino 12 were equipped with inductive charging modules, to recharge the onboard batteries at either end of the route. The technology used was provided by Primove, a subsidiary of Bombardier Transportation. It was a test operation, which did not prove to be very successful, but nevertheless brought many valuable insights for the envisaged large-scale electrification program of bus operation in Germany’s capital. The four buses, which proved to be complex in maintenance due to complex spare parts management, were taken out of service and are now to be sold if possible. The two similar e-bus projects with inductive charging in Brunswick and Mannheim are still in operation.

Nevertheless, electric buses will continue to operate on the line, although not on a daily or regular basis. It is the Solaris Urbino Electric bus which is part of the R&D project taking place at the nearby Euref University campus. In the future, e-buses with charging equipment via pantograph will be used.

In addition, BVG Berlin currently has 30 electric buses in the fleet (15 each from Mercedes and Solaris) which are operated on lines 142 and 300 among other lines since 2019.

The next deliveries of ebuses are planned for next year. The selection on which routes these buses will be used has yet to be finalized. In addition to 12-metre buses for depot charging, articulated ebuses will also be supplied next year as part of a research and development project, which will service bus line 200.

In-Motion-Charging (IMC) on a pilot project is still under consideration, but no concrete plans are currently being proposed.