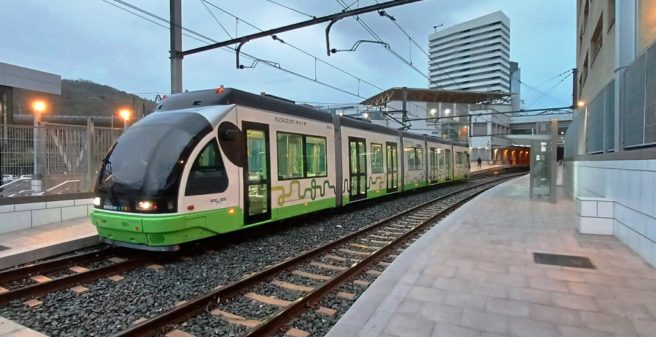 Today, 25 March 2022, saw the opening of revenue service over the 2.3 km extension of the Bilbao tramway from the current terminus at Atxuri via the intermediate stop at Abusu to Bolueta. Another intermediate stop (in La Peña) will be added at a later stage. Passsenger have a connection to metro lines 1 and 2 at Bolueta.

The new tram line is double track throughout using its own right-of-way on separated alignment off existing streets. It passes through a short tunnel and uses part of the route of the former regional train access from Kukullaga-Etxebarri via Bolueta to the traditional terminus at Atxuri, out of use since September 2019. We reported here: https://www.urban-transport-magazine.com/en/railway-becomes-tramway-bilbao/

The regional lines continue thier service using the new metro line 3 in Kukullaga for access to the city centre. A further extension of the tram on the old route to Etxebarri is being under consideration. Metro line 3, the regional trains and also the tram are jointly operated by the Basque regional railway operator Euskotren – all are metre-gauge. The route length of the Tram Bilbao increased to 7.9 km in total – from La Casilla in a half-circle around the city centre via Abando and Atxuri to Bolueta. 16 stops are served. Further line extensions include a connection from La Casilla to Abando to close the circle and a new line from Olabeaga to the river island Zorrozaurre.

For the extension, Tram Bilbao had taken over three CAF low-floor trams from the Vitoria-Gasteiz tramway, which also belongs to Euskotren. They are five-section units numbered 501-503, and thus somewhat longer than the original trams 401-408 in Bilbao, also supplied by CAF 18-20 years ago.

A network scheme you may find here: https://www.urbanrail.net/eu/es/bilbao/bilbao.htm