Biomethane as the alternative: 23 new Mercedes-Benz Citaro for SVE Euskirchen 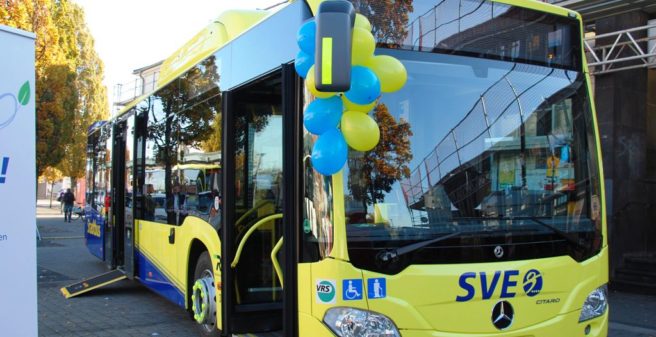 It is June 3, 1996, and the town of Euskirchen, a district town in North Rhine-Westphalia with 55,000 inhabitants located west of Bonn and Cologne, opens its city bus system under the name “Stadtverkehr Euskirchen (SVE)”. The founding managing director is Thomas Mager, a graduate geographer.

In fact, until June 3, 1996, Euskirchen was not entirely without a municipal bus service. The private company Laschke offered a very rudimentary service with only six trips daily from Monday to Friday and only three on Saturdays. Laschke was not the first to operate a city bus in Euskirchen – the company Heinrichs had previously been active here. With about the same range of trips that Laschke also offered. Which is why the municipal SVE comments today that the offer of the private operators was anything but attractive.

As an organizational form for the city bus, it was decided to set up a “management company” (GmbH) under private law, which would coordinate and finance the city transport. (Incidentally, the city transport company is also responsible for parking space management and the operation of parking garages). The “Stadtverkehr Euskirchen GmbH” was founded in November 1995, it is 100% owned by the city. It became the operator of the future city bus network, however, the actual service was provided by Laschke as subcontractor.

The new city bus network was set up to to address the following main objectives:

1. opening up the core of the city in areas where the intercity lines did not reach

2. to connect the pedestrian zone as far as possible without transfers

3. central transfer stop in the city center – was created with a bus station at the DB train station

4. as far as possible no parallel traffic with existing lines of the regional traffic.

The city bus under municipal direction started with the two lines 871 and 872 but was soon expanded and lines of Regionalverkehr Köln (RVK), the regional bus operator, incorporated. Since 2008 is the only operator in Euskirchen

In 2008 RVK purchased 17 Mercedes Citaro for the SVE services, both in short and regular 12-metre version (Citaro K and Citaro). A single MAN „Lion‘s City“ was also included in the fleet, painted in Euskirchen colous blue/yellow.

The city of Euskirchen awarded and continues to award its city bus services to its own “Stadtverkehr Euskirchen GmbH”.

Meanwhile, it was felt that the 2008 Citaro were old enough to be replaced by new cars. As a result of the invitation to tender, the decision was again made in favor of Citaro from Mercedes, namely 23 cars, but this time exclusively in the length of 12 meters. Gone, then, are the days of “short” cars on lines 871 and 872. “Even on these lines,” says the managing director of the SVE, “large buses get through on the roads.” And isn’t it a good thing that today, even on these lines, “small” buses are no longer enough?

The new buses feature an alternative gas propulsion system that has been unusual until now: they run on biomethane fuel. “Biomethane,” Eugen Puderbach, then managing director of RVK, told the author, “is an ideal fuel for regions that are heavily influenced by agriculture. That’s because biomethane is created by fermenting biomass from agriculture into this gas.” In other words, a fuel that exists in nature, but has so far not been commercially used. Although, already since 2017, RVK has been using biomethane buses on its SB 81 line from Kall train station to Vogelsang Castle in the Eifel National Park, so one is familiar with the technology.

One might wonder whether biomethane is a suitable alternative fuel in light of climate change. Aren’t we just hearing from the climate summit in Glasgow that methane is a problematic substance? However, the cows that produce the methane are there now – and are also needed to produce our milk. You can simply let their methane escape unused into the air, or you can use it to power buses – and dispose of some of the methane bymeans of burning it.

Passenger capacity: 105 passengers, of which: 31 seats, 74 standing places, 2 folding seats for “mother and child”, also as leaning area for wheelchair users, 3 single folding seats, 3 wheelchair spaces, one of which is for electric wheelchairs (if approved for carriage on the bus)

Folding ramp at the centre door

Four cameras to monitor the passenger compartment, for passenger safety and against vandalism (images are deleted after 48 hours if there have been no unusual events)

3. side-guard-assist (turning assistant, detects pedestrians, cyclists and other vehicles in the blind spot next to the bus when turning)

6. double screens for passenger information, left half for next stops, right half for fare information and transfer options

7. WLAN and USB charging facility (use of the Internet free of charge)

8. green / red lighting at the bottom of the doors

9. bus radar system (passenger can see where the buses are at any given time)

10. large destination displays in the rear