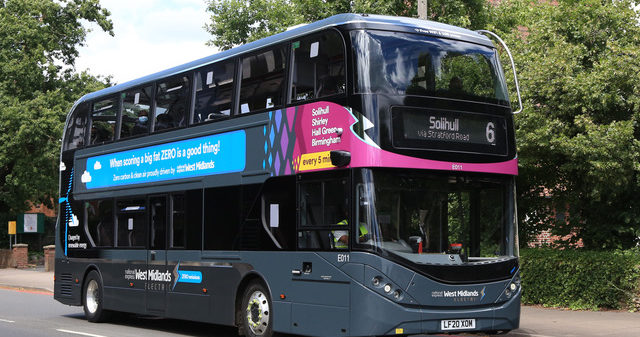 After several months delay occasioned by the Covid-19 pandemic, Birmingham has become the third British city to electrify a route using the BYD-ADL Enviro 400EV electric double-decker. On 5th July the city’s major bus operator, National Express West Midlands (NXWM) introduced 19 of the vehicles to service 6 between Birmingham City Centre and Solihull Town Centre. The 6 traverses the city’s heavily congested Stratford Road as well as entering the Birmingham Clean Air Zone, introduction of which has been further delayed. (It was originally scheduled for 1st January 2020 but delays in finalising the monitoring software caused an initial delay to 1st July, now extended to a full year’s delay by Covid-19.) Investment in the vehicles was facilitated by an award in 2017 of funding from the UK Government’s 2015 Low Emission Bus Scheme that also provided for the installation of charging facilities at NXWM’s Yardley Wood depot.

National Express does not plan to procure any further diesel buses

A further ten similar vehicles are currently being delivered to National Express’ Coventry depot with funding from the subsequent 2018 Ultra Low Emission Bus Scheme. These vehicles mark the next stage in National Express’s February 2020 pledge not to purchase another diesel bus following the arrival of the last of nearly 400 Euro6 ADL Enviro 400MMC vehicles. The electric buses feature the first Enviro 400 City style bodies in the National Express fleet but lack the glazed staircase side panels and centre doorway of the London version. They are finished in NXWM’s Platinum livery with a variety of environmental messages added on blue panels on both sides of the vehicle. All the vehicles carry female names in line with current National Express policy. Outside of the Covid-19 social distancing restrictions that currently severely limit capacity, 65 seated passengers will be carried on forward facing seats with access to USB power supplies. Electricity for overnight charging is obtained from a renewable source.

Their entry to service takes the total of BYD-ADL Enviro 400EVs on the UK roads to over 100. Since July 2019, 66 have entered service on London routes 43 (Metroline) and 94 (RATP) with further examples on order to convert another four routes during 2020. Manchester is the other city already benefitting from the Enviro 400EVs lack of tailpipe emissions with Stagecoach having introduced 32 single-door examples in a new green livery early in 2020 to services from Manchester city centre along Wilmslow Road, the 43 to the Airport and 111 to Southern Cemetery.

The BYD-ADL Enviro 400EV is a 10.9m long and 2.55m wide vehicle with a choice of heights, 4.2m or 4.3m. Its BYD chassis features two 150kW motors integrated into the rear drive axle and 382kWh lithium iron phosphate batteries that give a range of up to 160 miles (ca. 257,5 km) on a single charge using BYDs dual plug 2x40kW charging system. Zero emission heat pump technology is employed for heating and cooling.